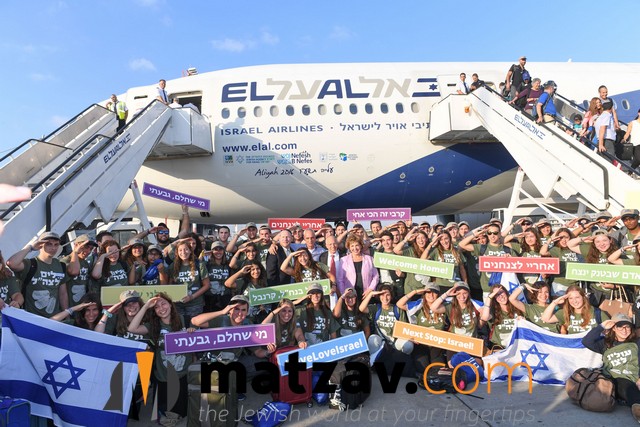 A total of 140 new olim (“immigrants”) from France arrived in Israel earlier this week and were welcomed at Ben-Gurion Airport by Pnina Tamano-Shata, Israeli Minister of Immigration and Absorption, and the president of the International Fellowship of Christians and Jews (IFCJ) Yael Eckstein, whose organization arranged the flight.

Many of the new immigrants who arrived on Monday had experienced some degree of anti-Semitism back home, which they said influenced their decision to move to Israel.

Several days before the flight with her husband and three children, Barbara Simha Bohadana said from Paris: “I was fired because I was Jewish. A pharmacy manager, who I worked for as a pharmacist, did not even try to hide the reason for my dismissal. He just told me that a wig or any other sign of my Jewishness was not acceptable, and that if I did not have them removed, I should just get up and leave. So I got up and left.”

Bohadana said her husband, an anesthesiologist by profession, “also had a hard time finding a job because of his Jewish background.”

“We have always been Zionists, and we knew we would make aliyah,” she added. “We are a religious family and abide by a traditional Jewish lifestyle. I am so happy that we are moving to Israel, and that we will never have to go through such experiences again.”

Nearly half of the new arrivals are children under the age of 18. Eleven of the olim are medical and paramedical professionals. Seventeen have careers in high-tech, while 27 have experience in liberal-arts professions. Fifty in all will be moving to the coastal city of Netanya, north of Tel Aviv, and 31 plan to move to Israel’s capital of Jerusalem. The rest seek other areas of the country.

‘Gates still open, even during an emergency’

Lionel Giuili, 41, who made aliyah with his wife, Stephanie, and their three children, noted: “My parents live in Israel, as well as my sister and a lot of other family members. We always knew we would make aliyah. We were always connected to Israel and maintained Jewish tradition.”

According to Giuili, the Hypercacher kosher supermarket siege in January 2015 was “the straw that broke the camel’s back.”

That attack took place when Amedy Coulibaly, an ISIS terrorist, killed four people and took several hostages before he was shot and killed by police, who stormed the supermarket.

After that incident, Giuili said he finally decided to move to Israel.

Although he and his family didn’t suffer any physical violence, he reported, the plague of anti-Semitism has had a direct impact on every member of the Jewish community.

“If, for example, while I was sitting and eating in my store and I heard someone enter, I automatically took off my kipah,” he said, adding that neither he nor his children went out in public wearing Jewish symbols for fear of being attacked.

Giuili noted that he had often traveled to Israel, visiting family members and his parents, who live in Jerusalem. “I always felt at home in Israel. I feel free in Israel, and I no longer have to hide my Jewish identity. This reflex I developed that made me take my kipah off and put it in my pocket will no longer be necessary.”

He also said moving during the coronavirus pandemic has not scared them at all: “We are aware of the situation in Israel, which as a whole has coped well, especially in the first wave when France was facing a shortage of masks.”

At the airport to greet the new arrivals, Tamano-Shata said “in 2020, we will welcome more than 10,000 olim from all over the world. It is a great privilege for me … to manage aliyah during this challenging time.

“I congratulate our brothers and sisters from France, who are Zionists and full of love for this country, and who today realized their dream of making aliyah and uniting with the people living in Zion,” she said.

Tamano-Shata invited more Jews to move to Israel, noting that “the Jews of Europe and the rest of the world are currently facing complex challenges, and every Jew should know that the gates of this country are still open, even during an emergency or crisis.”

As for the IFCJ, for more than 20 years, it has been helping Jews make aliyah. In 2014, the Fellowship began operating independently in the field of immigration and since then has brought more than 23,000 Jews to Israel from 30 countries around the world. New immigrants receive comprehensive assistance, including special grants.

Eckstein told JNS that the 140 olim represent the fulfillment of biblical prophecy and Zionism.

“Throughout Israel’s history, aliyah has never stopped,” she said. “Even now during the coronavirus crisis, the Fellowship continues to help Jews return to their homeland. We are so blessed to have Christian and Jewish friends in America and around the world who continue to help us do our work despite these challenges.”