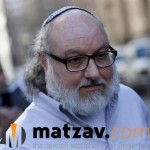 As he fights parole conditions that severely restrict his movement and make it almost impossible to hold a regular job, for Jonathan Pollard the most important part of the battle he is waging is about shemiras Shabbos, Hamodia reports.

A source close to the Pollards, who spoke to Jonathan shortly after Monday’s court hearing and asked not to be named because of the sensitivity of the matter, told Hamodia that “for Jonathan this is all about shemiras Shabbos. He was moser nefesh in prison to keep Yiddishkeit and is determined to fight any restrictions that will interfere with his keeping Shabbos.

“The level of emunah and commitment to halachah being exhibited by Jonathan and his wife is truly inspiring,” he added.

Pollard is currently required to wear a GPS monitoring system that consists of a non-removable transmitter installed on his wrist, and a receiver that is plugged into an outlet in his residence. Whenever he moves outside the range of the receiver, the transmitter — which is three inches long and two inches wide — acts as a GPS tracker and monitors his location.

The transmitter — which Pollard must wear seven days a week — must be charged daily. According to information that was made available to Pollard’s attorneys, when fully charged the transmitter lasts for a minimum of 12 hours and up to a maximum of 20 hours; the battery drains faster when outside the range of the receiver.

In their written reply to the legal challenge, the government claimed that the “monitoring device, when fully charged, generally maintains its charge for about 24 hours,” but admitted that the “charge may last for a shorter period of time if the parolee is away from the base station.

“Given that the monitor is capable of holding a charge for twenty-four hours or more, depending on certain variables, it is possible that Petitioner would not have to charge the device during a given Sabbath period. In short, Petitioner has failed to demonstrate a substantial burden on his exercise of religion caused by the GPS monitoring condition,” the government argued.

In their rebuttal, Pollard’s attorney pointed out that, for one thing, Shabbos lasts for 25 hours, not 24, and Yamim Tovim last for 49 hours. He added that even if the charge would last for 25 hours were Pollard to stay at home during this entire time period, it still would deprive him of the ability to daven with a minyan in shul.