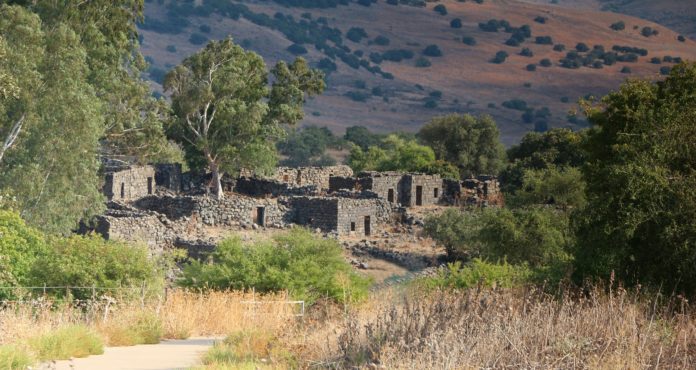 When the inscription was deciphered, by Danny Syon of the IAA and professor Haim Ben-David of the Kinneret Academic College, it aroused great excitement, as the location bears the same name today, despite a lack of settlement continuity at the site. Nafah was the name of the Syrian village that existed at the location until the Six-Day War in 1967, and is now the name of the adjacent Israel Defense Forces base.

The dig, directed by Dina Avshalom-Gorni and Yardenna Alexandre of the IAA, was conducted ahead of the planned installation of a water pipeline at Nafah by the Mekorot Water Company. The stone was uncovered in secondary use as a tomb covering, according to the statement.

Under the reign of the Roman Emperor Diocletian (approx. 300 C.E.), such stones marked village boundaries for the purpose of collecting taxes. This is the first boundary stone found in the central Golan Heights.

According to researchers, ancient names are typically preserved as a result of settlement continuity, from generation to generation. However, at Nafah, archeological remains have not revealed such settlement continuity. From the Byzantine period—about 1,500 years ago—and up to modern times, there are no settlements known to have existed here, apart from briefly during the Mamluk period (13th-15th centuries C.E.).

The find thus supports the theory that ancient place names can be preserved for many generations even without settlement continuity.

According to dig directors Alexandre and Avshalom-Gorni, the “fascinating excavation” at Nafah uncovered a public building from the Mamluk period, which served as a road station.

“This is the first public administrative building from the Mamluk period excavated in the Golan Heights,” they said.

The station was built on the main road connecting the Galilee to Damascus, and probably served as a stopover for traders and government officials traveling from Safed, the capital city of Mamluk Galilee, to Damascus, they added.

In the building’s courtyard, the remains of a furnace and some iron slag were found, indicating that an ironsmith may have worked here, repairing the horseshoes during the stopover.

Eyal Ben-David, unit manager of project management at Mekorot, said the company is proud to have been part of the discovery.

“As a company that devotes a lot of resources to building new water infrastructure throughout Israel, to strengthening the stability of the water economy also in the future, we are happy for the opportunity we have to contribute to the preservation of the heritage of the past,” he said.