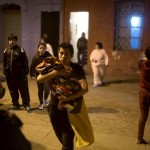 A magnitude 8.3 earthquake struck off the coast of Chile late Wednesday, shaking buildings in Santiago and flooding some parts of the coast. At least five people were killed and about 20 others injured in the quake, while one million people have been ordered to evacuate.

A tsunami warning was lifted early Thursday for the country and Hawaii, while Fiji, New Zealand, Peru and parts of Southern California remained on alert.

The coastal town of Coqumbo was hit with waves as high as 15 feet, while Tongoy saw waves as big as nearly 7 feet. Chilean President Michelle Bachelet has declared both areas catastrophe zones and said troops would be deployed to prevent looting.

The quake was felt as far away as Buenos Aires in Argentina. Read more at the Guardian.