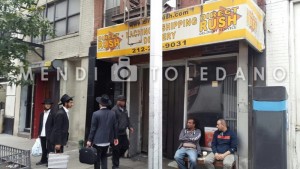 A Molotov cocktail was thrown at 2 yeshiva students from Israel while visiting New York City on Friday afternoon.

The bochurim were part of a group that took the Subway from Brooklyn to Manhattan to perform the weekly Chabad Mivtzoim rounds, helping Jewish business owners and clients to do a mitzvah.

Yisroel and Yosef, both 19-year-olds who asked that their surname not be mentioned, were walking on W. 37th Street near Ninth Avenue when one of them felt “an agitation.”

“A firebomb was thrown at them,” said a brother of one of the students. “It exploded and there was fire. They were shocked. An Israeli woman was walking by and ran over to check if they were okay.”

“Thank G-d, it missed them and landed on the pavement,” he added. “It was a male that throw it at them but they only got to see his back because he ran away. They didn’t hear him shout or say anything.”

He said they felt grateful for not being directly hit and will be holding a traditional seudas hoda’ah” this week.

This is the first reported attack on Jews or Israelis in New York since the recent escalation of violence by Arabs in Israel. Jewish lives were taken and others were injured in a series of “lone” attacks in the last 2 weeks.

While there is no specific reported threat to New York’s Jews, the NYPD has heightened security in Jewish neighborhoods.