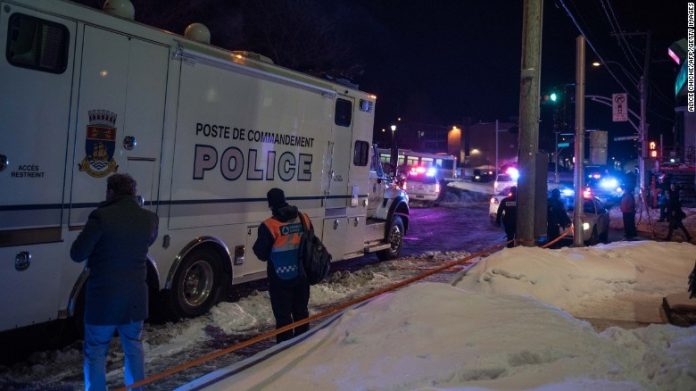 A spokeswoman for the Surete du Québec, the Quebec provincial police, said that two suspects had been arrested. Authorities do not believe at this time that others were directly involved in the attack at the Quebec Islamic Cultural Center.

Police provided no possible motive as they launched their investigation. But government officials wasted no time calling it an act of terrorism.

“We condemn this terrorist attack on Muslims in a centre of worship and refuge,” Canadian Prime Minister Justin Trudeau said in a statement.

“While authorities are still investigating and details continue to be confirmed, it is heart-wrenching to see such senseless violence,” he added. “Diversity is our strength, and religious tolerance is a value that we, as Canadians, hold dear.”

Trudeau tweeted: Tonight, Canadians grieve for those killed in a cowardly attack on a mosque in Quebec City. My thoughts are with victims & their families.

Quebec Premier Philippe Couillard called the shooting a “terrorist act,” saying at an overnight news conference that he reacted with “horror and incredulity” when he learned about the attack. He promised increased police protection for mosques and Islamic centers across the province of Quebec.

“We are with you,” Couillard said, addressing the province’s Muslim community. “You are at home. You are Quebecois.”

While mosques in Canada and the United States have been the targets of numerous acts of vandalism and other hate crimes in recent years, the Quebec City attack appears to be the first mass shooting at an Islamic house of worship in North America.

Witnesses said at least two gunmen in hoods or ski masks opened fire on congregants at the Quebec Islamic Cultural Center. Police said the six people killed were between 35 and 70 years old. In addition to the eight injured worshipers, a further 39 people escaped without injury, indicating that there were 53 people at the mosque when the gunmen hit. Authorities did not provide information on the type of firearms used in the shooting.

One of the suspects was arrested 14 miles east of the mosque along the shore of the St. Lawrence River on the approach to a bridge leading to the Island of Orleans. The bridge was closed by authorities. The second suspect was arrested close to the mosque, according to police, who have not publicly identified the suspects.

While describing the attack as terrorism, authorities did not say by whom and for what motive. Nor did they describe the ethnicity or religious identity, if any, of the perpetrators. That left open a wide variety of possibilities, including anti-Muslims or Muslims. Much of the violence in countries such as Iraq and Syria involves warfare among Shiite and Sunni Muslims.

Officials at the Quebec Islamic Cultural Center urged followers not to spread rumors about Sunday’s attack until more information was made public.

Still, the context of the attack was inescapable, coming after a rise in anti-Muslim rhetoric, behavior and vandalism in both the U.S. and Canada and amid a heated debate over President Donald Trump’s executive order temporarily shutting U.S. borders to refugees and migrants from seven mostly Muslim countries.

While debate has raged in the United States over whether to accept refugees from war-torn Syria and elsewhere, the Canadian government has become more open to people fleeing conflict in the Middle East. Trudeau has personally greeted some refugees that have entered the country, and on Sunday said he welcomed people, regardless of their faith, who were rejected from the United States under Trump’s order.

Still, Muslims in both Canada and the United States have reported a surging number of hate crimes in recent years, ranging from vandalism to assault to arson at their places of worship.

The Quebec Islamic Cultural Center, one of several mosques in the area, was the target of an apparent hate crime in June, when someone left a bloody pig’s head wrapped in cellophane at the front door, along with a note reading “Bonne appétit.” The consumption of pork is banned by Islam. Concerned about that kind of incident, the mosque installed several closed-circuit cameras around the building.

“All our thoughts are with the children, whom we must tell about the death of their fathers,” the mosque said on its Facebook page Sunday. “May Allah give them patience and endurance.”

Police said a joint task force of terrorist specialists from the Quebec provincial police, the City of Montreal Police and the Royal Canadian Mounted Police was being deployed to the site, with explosives experts and canine teams among them.

The Quebec Islamic Cultural Center is located near Laval University, which has a large community of international students, many from French-speaking Africa and the Maghreb.

The shooting is a particular shock for Quebec City, a quiet white-collar city that reported just two murders in all of 2015. The metropolitan area has about 806,000 people.

Samer Majzoub, the president of the Canadian Muslim Forum, a Muslim advocacy group in Quebec, said he knows people who attend the Quebec City mosque, but that he and other area Muslim leaders were still trying frantically to find out who had been shot.

“People that we know, we are not sure if they’re alive right now,” he told The Post. “It is shocking. It never came to our mind that we’d have a terrorist act as such, especially in Canada.”

Majzoub said Canada has seen increasing anti-Muslim hostility over the past year, but still nowhere near the level witnessed in the United States and Europe. He said the area near the mosque has appeared to be particularly prone to anti-Muslim sentiments.

“This masjid has witnessed a lot of issues before – threats and vandalism, and some Islamophobic graffiti,” he said, using the Arabic word for mosque. “It’s not the first time.”

Majzoub said the mosque has a small congregation of about a hundred people and attracts a lot of students because it’s near a university. He said many of its attendees are of North African descent.

“We never thought it could happen,” he said. “It was a slaughter.”