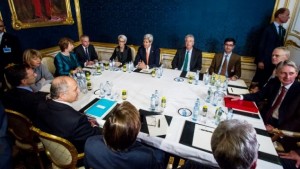 Nearly 200 retired US generals, admirals and former political officials have come out strongly against the Iran nuclear accord, and have called upon Congress to sink the on the grounds that it will “enable Iran to become far more dangerous.”

Among the signatories are top former career officers from every branch of the US military, as well as officials who have served in the White House, under both Democratic and Republican administrations, The Washington Post reported Wednesday.

“The agreement will enable Iran to become far more dangerous, render the Mideast still more unstable and introduce new threats to American interests as well as our allies,” the letter, which was addressed to Republican and Democratic senators and congressmen, stated.

Written in response to a similar petition two weeks ago by 36 retired US generals that backed the deal, the letter was endorsed by former undersecretary of defense for intelligence William Boykin, former vice chief of naval operations Leon Edney, and the retired vice commander of US Air Forces in Europe, Thomas McInerney, among others.

“What I don’t like about this is the number one leading radical Islamic group in the world is the Iranians,” McInerney said.

“They are purveyors of radical Islam throughout the region and throughout the world. And we are going to enable them to get nuclear weapons. Why would we do that?” he asked.