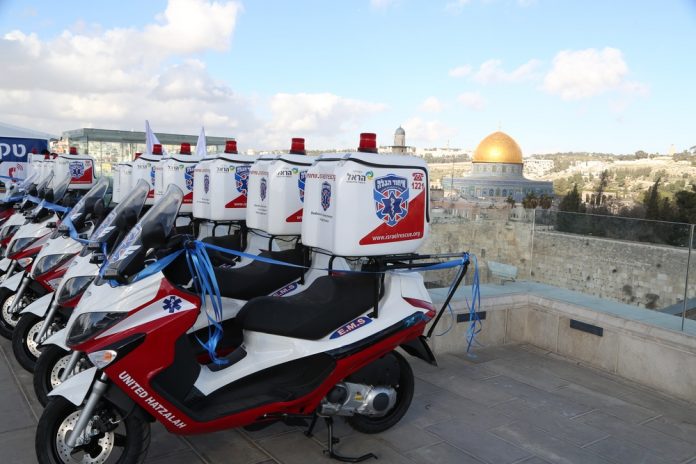 A special delegation from the U.S. organized by Christians United for Israel (CUFI) traveled to Yerushalayim last week and visited the headquarters of United Hatzalah, an Israeli volunteer-based emergency medical services (EMS) organization.

According to a statement released by Hatzalah’s international spokesperson, the CUFI delegation—consisting of some 30 pastors from multiple Christian denominations—learned about the organization’s “lifesaving, all-volunteer, emergency medical services (EMS) model,” and saw “firsthand how the Hatzalah model is uniting the peoples of Israel in the joint cause of saving lives.”

During their time at Hatzalah’s Jerusalem headquarters, the Christian delegation also toured the organization’s command center, learned about the advanced technology used at the facility and met with a diverse group of volunteers representing Israel’s Jewish, Muslim and secular communities, among others.

“We have a number of pastors here from different states and different denominations,” CUFI Western Regional Coordinator Randy Neal. “A lot of them are not familiar with Israel and most of them have never been to Israel before. I have had the occasion and privilege to learn about United Hatzalah and I believe that the organization encapsulates the heart of Israel.”

Neal added, “I really believe that that the nobility and purity of the mission that allows life to trump all of the other things that go on here, it transcends races, cultures, religions, bringing Jews, Muslims and Christians together for something that is a common denominator.” JNS.ORG