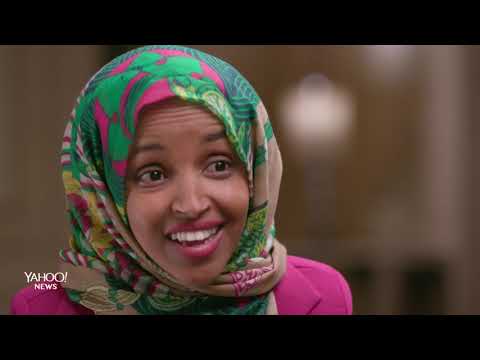 Congresswoman Ilhan Omar of Minnesota, who has faced past antisemitism allegations, compared Israel to Iran in a Yahoo! News interview published earlier this week.

“When I see Israel institute a law that recognizes it as a Jewish state and does not recognize the other religions that are living in it, and we still uphold it as a democracy in the Middle East, I almost chuckle, because I know that if we see that in any other society we would criticize it, we would call it out, we do that to Iran, we do that to any other place that sort of upholds its religion,” Omar said.

“And so I am aggravated, truly, in these contradictions,” she added.

Asked about the position the US should take regarding the Israeli-Palestinian peace process, Omar replied she was in favor of “an equal approach to dealing with both [sides].”

“Most of the things that have always been aggravating to me is that we have had a policy that makes one superior to the other, and we mask it with a conversation that’s about justice and a two-state solution, when you have policies that clearly prioritize one over the other,” she asserted.

Omar became a lightning rod for controversy following a November 2012 tweet she posted during a war between Israel and Hamas in the Gaza Strip, in which she wrote, “Israel has hypnotized the world, may Allah awaken the people and help them see the evil doings of Israel.”

The tweet was widely condemned as containing classic antisemitic themes regarding malign Jewish power and influence.

Omar repeatedly declined to repudiate the tweet for several years. In two interviews this month with CNN, she claimed she was only criticizing Israeli policies.

“I don’t know how my comments would be offensive to Jewish Americans,” she said. “My comments precisely are addressing what was happening during the Gaza war and I am clearly speaking about the way that the Israeli regime was conducting itself in that war.”

“What is really important to me is that people recognize that there is a difference between criticizing the military action by a government that has exercised really oppressive policies and being offensive or attacking to particular people of faith,” she told another interviewer.

After the publication of a critical op-ed by New York Times opinion editor Bari Weiss earlier this month, Omar finally appeared to walk back her sentiment, tweeting, “Hi @bariweiss, You are correct when you say, ‘Perhaps Ms. Omar is sincerely befuddled and not simply deflecting.’ In all sincerity, it was after my CNN interview that I heard from Jewish orgs. that my use of the word ‘Hypnotize’ and the ugly sentiment it holds was offensive.”

“It’s now apparent to me that I spent lots of energy putting my 2012 tweet in context and little energy is disavowing the anti-semitic trope I unknowingly used, which is unfortunate and offensive,” Omar continued.

She did tack on a caveat, noting, “With that said, it is important to distinguish between criticizing a military action by a government and attacking a particular people of faith.”

“It is important that when you see oppression taking place — when you see our values being attacked as humans — you stand up, and it doesn’t matter who the inhabitors of that particular region might be. Whether it is your father, your brother or your sister, you speak up,” she wrote.

Watch the Yahoo! News interview with Omar below: