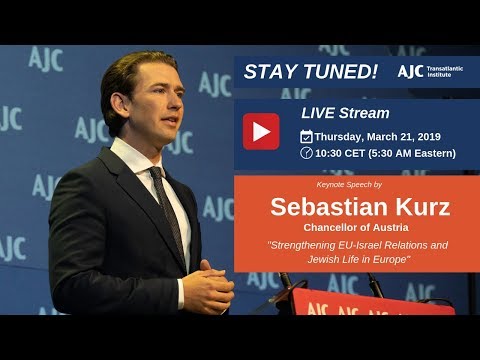 In an address at a conference held by the American Jewish Committee’s Transatlantic Institute on Thursday, Austrian Chancellor Sebastian Kurz said, “In today’s political climate, antisemitism and anti-Zionism are often two sides of the same coin.”

Speaking on the struggle against antisemitism in Europe and elsewhere, Kurz told the audience, “Europe is definitely a continent of safety, of liberty, and rule of law. To live up to this heritage we must ensure that every member of our society is and also feels safe and free. No one must every feel afraid to walk in the streets of any European country, no matter who they are, where they are from, or what their faith is.”

“We owe this assurance to all people in Europe, and especially to the Jewish community,” he added.

Noting that “traditional” antisemitism remained a problem, Kurz nonetheless pointed out, “Especially among migrant communities from the Middle East, antisemitic sentiments are increasing. Social media and propaganda from abroad appear to play a significant role also in our societies.”

“In Austria,” he said, “we are taking concrete steps to prevent especially our youth from all backgrounds to be influenced by these dangerous ideas.”

Among these measures are “a documentation center on radical and political Islam,” he said. “This new entity will track and identify roots and hot spots of these dangerous ideas in order to fight them effectively.”

Kurz noted that Austria had also banned the symbols of radical Islamic terrorist groups, such as Hezbollah and Hamas.

On the question of European relations with Israel, Kurz said, “We also have a special responsibility towards the State of Israel and the security needs of the Jewish people there.”

“Many are too quick to judge,” he admonished. “Israel is often criticized, but whenever one country criticizes another, whenever judgments are made about other people or nations, we must not forget their circumstances, and we must test the motivation behind the judgement. Is this criticism serving justice, or is it serving prejudice?”

“We must always remember that Israel is fighting to be a free country, a liberal democracy, while being under constant threat,” he went on to say. “There is more we share in the struggle than could ever divide us.”