11 Cheshvan is the yahrtzeit of Rochel Imeinu and a special day of tefillah.  Kever Rachel was built as a place for Jews to daven in golus. For those who are davening for children, a shidduch, parnassah, health or any other matter, the zechus of Rochel Imeinu is a zechus for them. Going to the kever on the yahrtzeit is a tremendous merit.

According to official statistics, Kever Rachel is one of the three sites in all of Eretz Yisroel visited by the largest number of visitors. Every year, on the yahrtzeit of Rochel Imeinu, tens of thousands of people visit the site. The number of visitors on that day has exceeded 150,000. According to some estimates, even more than 200,000 people flock to the kever.

This year, due to the current circumstances and Covid restrictions, Kever Rachel will not be welcoming the crowds who usually arrive at Kever Rachel on that special day.

Mosdos Kever Rachel, which sponsors a year-round kollel at the kever and provides free food and drinks for visitors on the day of the yahrtzeit, felt compelled to arrange an unprecedented undertaking for the yahrtzeit of Rochel Imeinu, helping people all over the world connect to Manna Rochel even under the current conditions.

This Wednesday, October 28, at 7 p.m. Mosdos Kever Rachel will present an exhilarating live virtual Kever Rachel event that you do not want to miss. The program, which will be streamed for free at www.keverrachel.com and will be hosted by Boruch Perlowitz, will feature divrei chizuk from Rabbi YY Jacobson and Rabbi Dovid Goldwasser and musical performances by Shloime Daskal, Baruch Levine and the Shir V’shevach Boys Choir. There will be fascinating personal accounts of Mosdos Kever Rachel miracles and other surprises and exciting features.

In addition, Yidden all over the globe will be able to send their kvittelach to be placed at Mamme Rachel’s kever on the yahrtzeit by calling 888.276.2435 or visiting www.keverrachel.com.

This year, while we can’t go to Mamme Rachel’s kever on her yahrtzeit, the zechus of her tefillos can still be tapped into through the virtual Kever Rachel event. Be sure to log on this Wednesday at 7 p.m. to keverrachel.com. 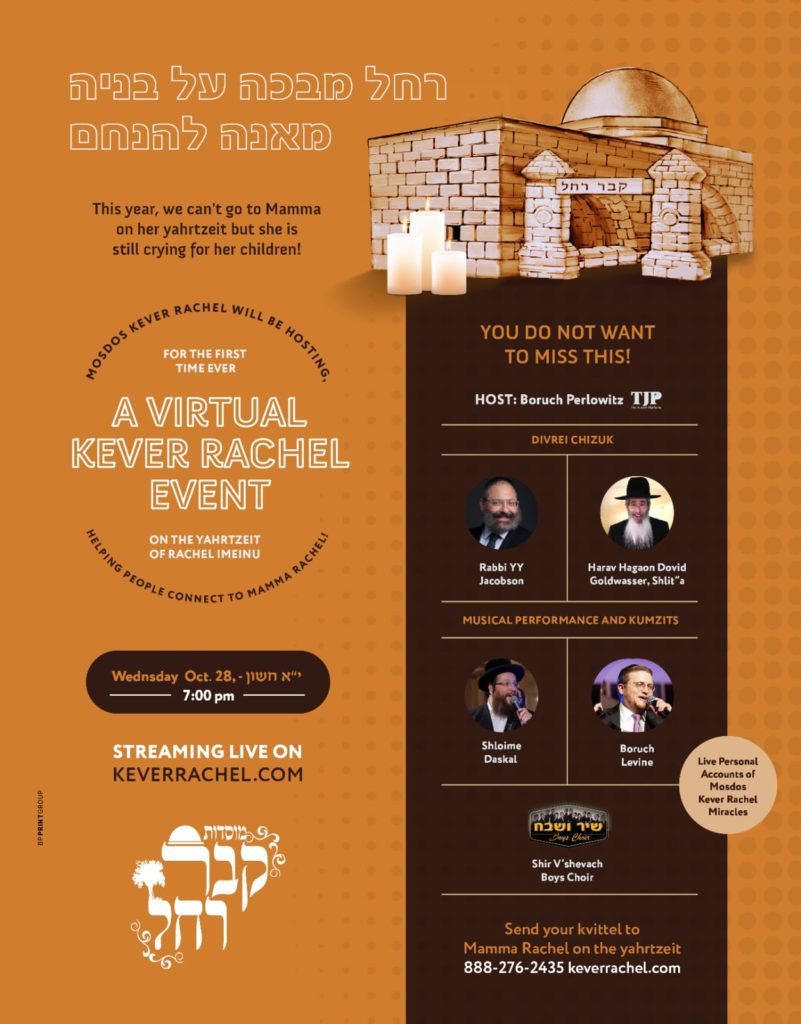