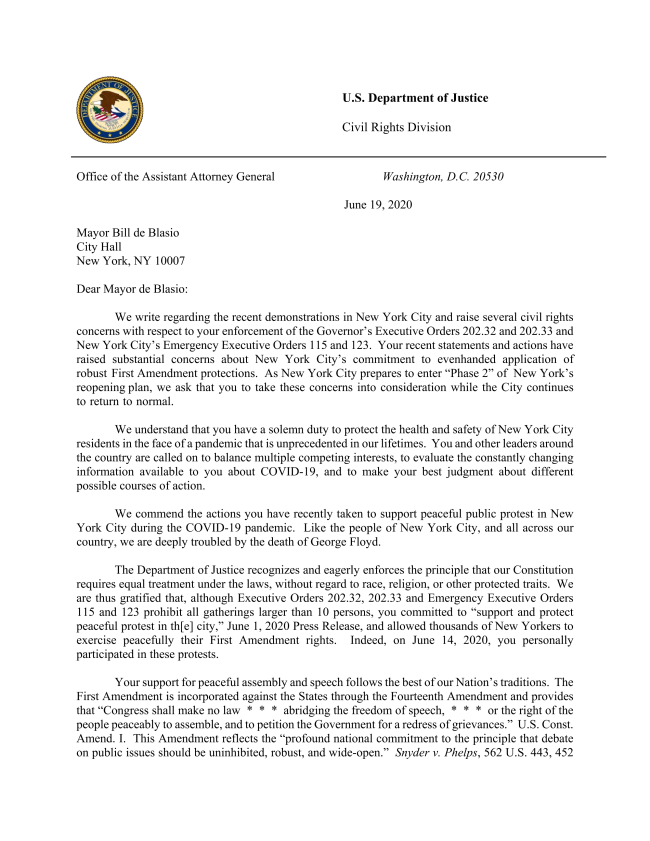 This past Friday the U.S Department of Justice issued a letter to New York City Mayor Bill de Blasio expressing concern over the double standard seen in New York City in regards to freedom of religion.

The letter, signed by Eric S. Dreiband, Assistant Attorney General for the Civil Rights Division, cautioned the Mayor regarding his actions in restricting religious gatherings due to the threat of the spread of COVID-19, while at the same time encouraging mass demonstrations with no social distancing. The Assistant Attorney General admonished the Mayor for the inequity of his favoring freedom of assembly over freedom of religion.

Mr. Dreiband highlighted several scenarios where the Mayor overlooked state guidelines infractions when it came to the protests that took place after the murder of George Floyd. In contrast, the Mayor was quick to threaten severe repercussions for religious communities that violated state guidelines.

Mr. Dreiband writes, “In light of your support for and participation in recent protests in New York City, the message to the public from New York City’s government appears to favor certain secular gatherings and disfavor religious gatherings.” The letter stresses that both the right to peacefully assemble and freedom of religion are equally protected in the first amendment of the U.S Constitution.

The letter acknowledged the Mayor’s right to decide how to protect his city and commended him for his efforts in stopping the spread of COVID-19. However, the Department of Justice wanted to ensure that the Mayor was cognizant of the apparent double standard that has been emerging in New York City in recent weeks and to inform him that the Department was displeased with this violation of the First Amendment.

Agudath Israel of America appreciates the Department of Justice’s acknowledgement of this issue and for calling out the incongruous behavior of Mayor de Blasio.

Agudath Israel has been advocating for religious freedoms throughout the pandemic. Over the past few weeks, Agudath Israel has been heavily involved in two lawsuits protesting New York State’s violation of First Amendment rights, one to prevent the closure of overnight camps and the other to protest the continued restrictions on houses of worship.

According to Rabbi Zwiebel, Executive Vice President of Agudath Israel, “Religious freedom is one of the rights granted to us in this great country and is the reason the Jewish community – and every religious community – can thrive here today. We hope that our government leaders will acknowledge this fact and ensure that religious freedoms are fully and properly protected.”

Leave a Reply to Let's be honest Cancel reply