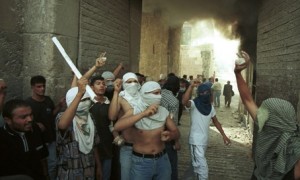 Five Arabs attacked a charedi man near Shaar Yaffo in the Old City of Yerushalayim last night, Friday night, before running off towards the New Gate, Arutz Sheva reports.

The victim reportedly did not need medical attention.

Police reviewed security footage and located the perpetrators, still in the Old City. All five were quickly arrested and have been brought for questioning.

In addition, a group of Arabs threw stones at vehicles near Chevron shortly before Shabbos began. One of the cars, which was carrying a baby and several children at the time, was hit and its windshield smashed. Fortunately, there were no injuries to the people inside.