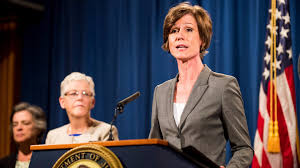 On Monday, we learned much more about the moment that brought down Michael Flynn, the national security adviser whom President Donald Trump fired less than a month into the job for misleading Vice President Mike Pence about his conversations with Russia’s ambassador to the United States.

But we were also left with questions about why the White House waited 18 days after finding out Flynn misled them to fire him.

Former acting attorney general Sally Yates and former director of national intelligence James Clapper testified about all this Monday before a Senate judiciary subcommittee. Here are five new things we learned – and some questions raised:

1. Michael Flynn lied about Russia, and it opened him up to potential blackmail from Russia

In December, before Trump assumed office, Flynn talked to Russian Ambassador Sergey Kislyak about potentially lifting U.S. sanctions President Barack Obama had just levied on Russia. These sanctions were punishment for alleged Russian meddling in the election to try to help Trump win.

About a week before Trump’s Jan. 20 inauguration, the world learned that Flynn and the ambassador were talking. Pence then went on CBS News’ “Face the Nation” and said Flynn’s conversations with Kislyak “had nothing to do” with sanctions.

But Yates had intelligence showing otherwise. Flynn’s conversations with Kislyak were picked up by the FBI during “routine surveillance” of the Russian ambassador, and she knew they had talked about sanctions.

She went straight to the White House’s top lawyer, Don McGahn, to tell him that Flynn was lying to them. She did it for two reasons, she said in her testimony:

“We had two concerns. Compromise was certainly the number one concern. And the Russians use compromise material information in a variety of ways, sometimes overtly, sometimes subtly. And again our concern was that you have a very sensitive position like the national security adviser and you don’t want that person to be in a position where the Russians have leverage over them.”

2. What (or whether) the White House did anything with this information is unclear

Yates testified that she told McGahn that Flynn was lying so they could do something about it. She said McGahn called her back the next day to talk more. Specifically, she said, he wanted to know:

Why does it matter to Yates’ Justice Department if one White House official lies to another? (She explained it was because Flynn could be blackmailed by the Russians for being caught in a lie that the Russians knew was a lie.)

Would the Justice Department pursue a criminal case against Flynn? (Yates did not go into detail on this. She did say that the FBI had recently interviewed Flynn as part of its investigation into Russia meddling in the U.S. election. We also know the Pentagon’s watchdog is investigating payments Flynn, a retired general, received from Turkey and Russia without first getting permission from the U.S. government.)

Yates said she doesn’t know what the White House did with this information. (Trump fired her a few days later for saying she wouldn’t defend Trump’s travel ban.)

We can gain some insight from looking at public statements from the White House around that time. In February, White House Chief of Staff Reince Priebus said on “Face the Nation” that McGahn decided not to take action: “Our legal counsel got a heads-up from Sally Yates that something wasn’t adding up with his story. And then so our legal department went into a review of the situation . . . The legal department came back and said they didn’t see anything wrong with what was actually said.”

It was only after The Washington Post reported about the contradictions between Flynn’s statements and what really transpired that Trump fired Flynn.

3. Republicans are almost single-handedly focused on HOW we know Flynn talked with the Russian ambassador

The FBI regularly spies on who the Russian ambassador to Washington talks to. But by law, the identity of U.S. citizens’ conversations are kept secret from all but a handful of top intelligence officials, including someone in Yates’ position.

Which begs the question: Who “unmasked” Flynn’s identity to her, and who leaked that identity to the media? Before Yates took the witness stand, Trump tried to draw both those lines back to her.

Ask Sally Yates, under oath, if she knows how classified information got into the newspapers soon after she explained it to W.H. Counsel.

Sen. Charles Grassley, R-Iowa, directly asked Yates on Monday whether she leaked information to the media or whether she asked the intelligence community to reveal Flynn’s identity to her. She said no.

Republicans seemed intent on getting to the bottom of who did. They have also pointed the finger at Susan Rice, who was Obama’s national security adviser. Rice recently acknowledged that she did request to unmask Trump campaign and transition officials who were mentioned in foreign surveillance intelligence reports. There’s no evidence she used that information for anything but her official duties.

4. Republicans are also really mad at Yates for not defending Trump’s travel ban

Around the same time this was all happening, Yates became a hero on the left for announcing that she would not defend Trump’s original executive order attempting to temporarily ban travelers from seven majority-Muslim countries.

She told senators on Monday that she thought the ban was “unlawful” and that she couldn’t defend it in court. Trump fired her.

“It’s up to the courts to decide, and not you, correct?” Sen. John Cornyn, R-Texas, said. ” … I have to tell you, I find it enormously disappointing.”

5. Democrats are pretty sure there’s more to the Trump-Russia story than Flynn

We’ve had a couple of these public congressional hearings on Russia this year. And in nearly every single one, the top Democrat on the committee spends time outlining the Trump administration’s connections to Russia, as Sen. Sheldon Whitehouse, R.I., did Monday:

“[W]e know that President Trump himself has long pursued business deals in Russia. He is reported to have done or sought to do business there since the mid-1990s. … One Trump property in midtown Manhattan had become, within a few years of opening, ‘a prominent depository of Russian money,’ according to a report in Bloomberg Businessweek. …. In testimony before the Judiciary Committee last Wednesday, [FBI] Director Comey acknowledged that financial leverage has been exploited by Russian intelligence ‘over many decades.’