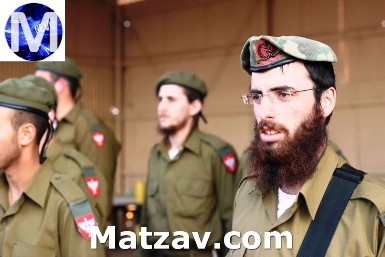 Fifty-two religious soldiers of the combat engineering corps were recently ordered to shave or be denied a weekend furlough. Only fifteen of a group of sixty-seven soldiers were allowed to retain their beards.

“I learned in a yeshiva high school. I have been growing a beard for most of my life for religious reasons…,” one soldier complained. ‘This morning, they announced that anyone who didn’t get a temporary beard permit at the intake center has two options: to stay on base for the weekend or shave their beard and go home. I was in shock. Why are they forcing a teenager to [give up] two values I believe in, first, growing a beard and the second honoring parents?”

Army sources explained that since the army is seeking to reduce the number of bearded soldiers, soldiers with thick beards were allowed to keep them, but stubbly beards no longer qualified.

In reaction to the beard issue, which has been prevalent for some time, and other religious concerns, a new organization called One Command was set up and called on soldiers to submit complaints.

“Sadly, we know of hundreds of documented cases where soldiers were denied their rights and where there was an incorrect attitude towards Judaism,” its founders said. “This included lack of tefillin, non-kosher food, soldiers forced to visit places [such as churches] against their consciences, forcible shaving of beards, lack of Jewish amenities and more. We think that most of this was due to misunderstanding and unintentional, and that most complaints will be solved by forwarding cases to relevant authorities.

“Something bad is happening in the IDF high command in recent years,” the founders added. “There is a change in attitude toward Jewish halacha and addressing the needs of soldiers who wish to preserve their Judaism.”

An IDF spokesman said in response to the new initiative, “The IDF rejects any attempt to political involvement while pretending to help soldiers. The IDF will continue to be a melting pot for all sectors of Israeli society and protect the State of Israel as a national people’s army. We regret that there are those who choose to invent false allegations whose sole objective is to create division in the army.”