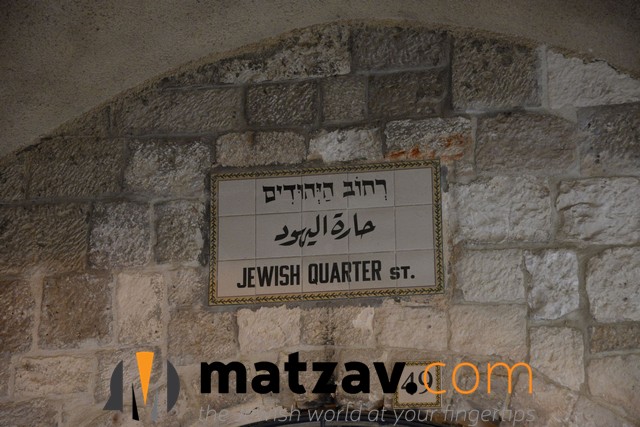 The Company for the Reconstruction and Development of the Jewish Quarter in the Old City of Yerushalayim has several projects underway at a total cost of 200 million shekels ($55 million).

The initiative seeks to improve public spaces in the Jewish Quarter and adapt them to the needs of residents, as well as tourists. The project entails making infrastructure accessible; outdoor improvements such as shaded areas and recreational areas; the installation of uniform outdoor furniture and advanced lighting; and laying out clearly marked tourist routes, including explanatory signs at important points and signs leading to the Western Wall.

The first stage of the project was carried out at Resnick Square on Hayehudim Street, a main tourist route that runs parallel to the Byzantine-era Cardo, where the Burnt House, the home of a wealthy Yerushalmi from the Bayis Shayni period, has been refurbished. The new site was scheduled to be inaugurated on Sunday in a special ceremony led by Yerushalayim Mayor Moshe Lion and Yerushalayim Affairs and Heritage Minister Ze’ev Elkin.

Under the auspices of the project, the Company for the Reconstruction and Development of the Jewish Quarter has also started renovating the Tiferet Yisrael Synagogue, which was destroyed in 1948. Work is expected to take a few years, and the completed building will reach a height of 25 meters (82 feet).

Another issue the company is addressing are the staircases that lead from the Jewish Quarter to the Kosel plaza, which are not accessible to the disabled. The company has launched a project to build an elevator and tunnels that will lead directly to the plaza. The elevator and passageway encompass a total of 2,000 square meters (21,500 square feet), with the project to be completed at an estimated cost of 57 million shekels ($16 million). The elevator is expected to be operational by January 2022.

In addition, the company plans to renovate the exterior of the Wohl Archaeological Museum, one of the largest and most important sites in the Jewish Quarter. The museum includes the remnants of homes that belonged to the city’s aristocracy from the time of King Herod to the destruction of the Bayis Shayni in 70 C.E.

Company CEO Herzl Ben Ari said, “I hope that everyone who comes to the Jewish Quarter of Yerushalayim will feel that we have fulfilled a dream for them and that every guest and tourist who arrives from all over the world will sense the uniqueness and the eternal values of the capital of Israel.”