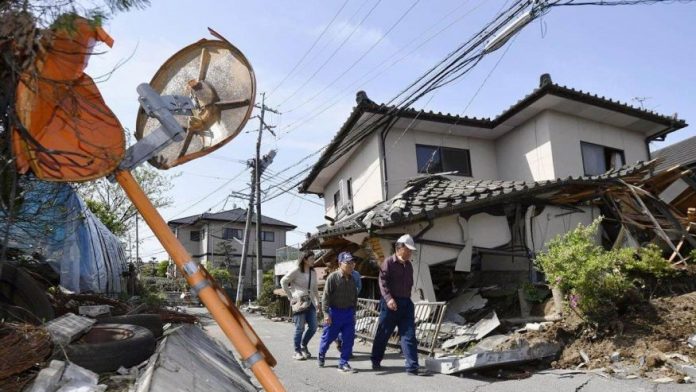 Japan’s Fukushima region was bracing for another tsunami Tuesday morning, after a 6.9 magnitude earthquake rocked the area devastated five years ago.

Sirens were blaring along the coastal area, warning residents to evacuate to higher ground, as authorities warned that a 10-foot high tsunami could be approaching.

There were no immediate reports of damage or changes in the radiation level at the Fukushima Daiichi nuclear plant, which suffered a triple meltdown after the 2011 earthquake, but Tepco, the utility company, said it was monitoring the site closely.

The 6.9 quake struck at 6 a.m. local time Tuesday and was centered about 45 miles off the coast from Namie, a town close to the nuclear plant. It was followed by large aftershocks measuring 5.4 and 4.8.

The earthquakes were felt in Tokyo, 160 miles south of the epicenter. Bullet train services were suspended and a fire broke out at a petrochemical plant, although it was extinguished.

Japanese television showed footage of the relatively calm coastline in the Fukushima and Tohoku regions, with warnings that a tsunami could be coming soon.

The enormous 9.0 earthquake that struck on March 11, 2011, caused huge damage at the Fukushima nuclear plant and the evacuation of the area around it, for fear of radiation. Even today, the villages closest to the plant remain ghost towns, frozen in time.

But it was the tsunami that followed that had the most devastating results. A 50-foot high wave inundated the Tohoku region, north of Fukushima, claiming 18,000 lives. Five years on, 60,000 people still live in temporary housing and coastal towns like Rikuzentakata remain huge construction sites, as authorities try to raise the land above the tsunami risk zone.