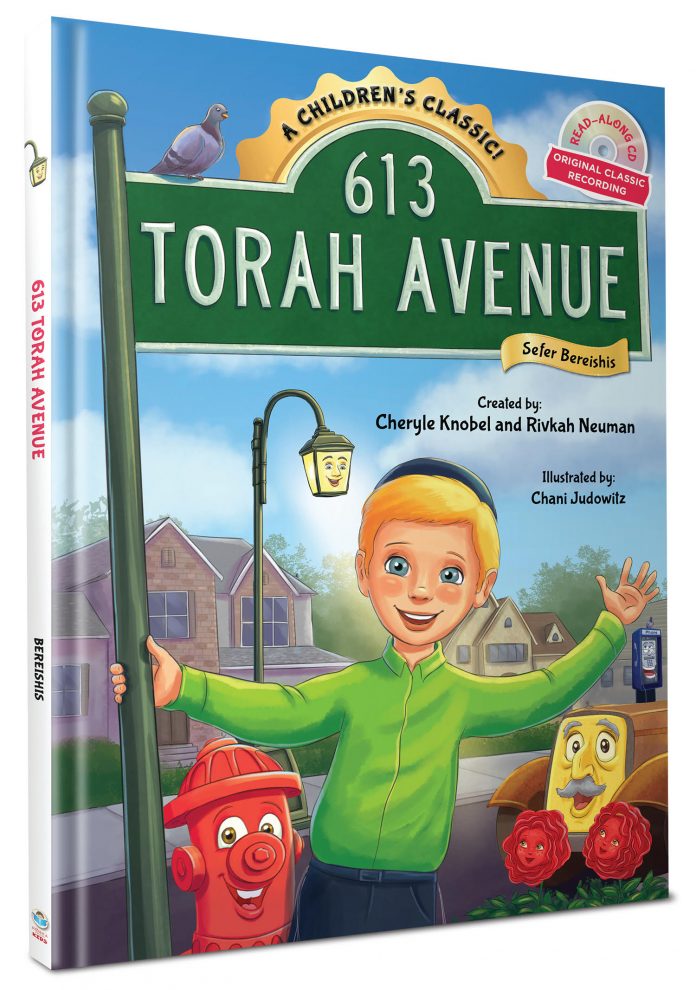 Ever since young Chaim moved into his new home at 613 Torah Avenue and was welcomed by the streetlamp pole, he has been delighting and entertaining Jewish children all over the world.  It’s rare for a children’s production to remain consistently popular and relevant for so many years, but the charming characters and unforgettable songs in the series have managed to withstand the test of time.

Now the creators of 613 Torah Avenue, Cheryle Knobel and Rivkah Neuman, have embarked on an extraordinary new venture. They are introducing 613 Torah Avenue Sefer Bereishis in book form. Published by Judaica Press, the oversized, glossy, and laminated volume promises to become a favorite item in Jewish homes everywhere. Children will have an opportunity to enjoy these beloved songs and characters anytime and anywhere.

The Torah Avenue series has been around for a long time, but has remained refreshingly current. Originally recorded as an album, it has since been produced as a cassette, an 8-track, a CD and a DVD. And while its format is contemporary, its message and meaning remain eternal and timeless.

Of course, there’s more to 613 Torah Avenue than meets the eye. According to Rivkah, the series is “not only a medium of entertainment. It’s a quality vehicle for learning about the parsha. Much thought was put into the songs and the narrative to instill valuable lessons. The book provides a priceless tool for parents and grandparents to bond with their children as they journey with Chaim through the parsha.”

That’s why many parents requested a new version of the timeless classic that could be enjoyed on Shabbos or during quiet times. “Today’s busy parents,” says Cheryle, “enjoy connecting with their children around the Shabbos table and discussing the timeless lessons of the Torah in a medium that is fun for the whole family.” What better way to instill the valuable lessons of Torah Avenue than curled up on the couch with little ones, singing the classic melodies together?

Chani Judowitz’s vibrant and vivid illustrations bring the beloved characters of Torah Avenue to life. Who can forget the car that’s covered with rust, the ringing telephone, or the talking rose bush plant? These whimsical characters are richly portrayed in bold and brilliant colors and will no doubt be a source of hours of quality entertainment. Plus, the book comes with its own CD, so children can sing along with Chaim while gazing at lifelike illustrations.

It’s been a long time since two preschool teachers, Cheryle and Rivkah, pooled their creative talents to collaborate on a production that has genuinely inspired thousands of eager and enthusiastic youngsters. Now those timeless lessons will be enjoyed once again in a brand new format. The book version of Sefer Bereishis promises to become a runaway bestseller.

Because “anything can happen on Torah Avenue.”

613 Torah Avenue, published by Judaica Press, is endorsed by Rabbi Shmuel Yaakov Klein, director of Torah Umesorah, and is available at Judaica stores near you.