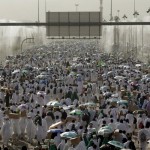 More than 700 people of numerous nationalities have been crushed to death in a stampede near the holy city of Mecca as the hajj pilgrimage reaches its climax, Saudi officials say.

An additional 800 were injured as millions took part in the final rite of the journey.

The gathering, which attracts more than 2 million people, had been without incident for the past nine years due to safety improvements. Read more.