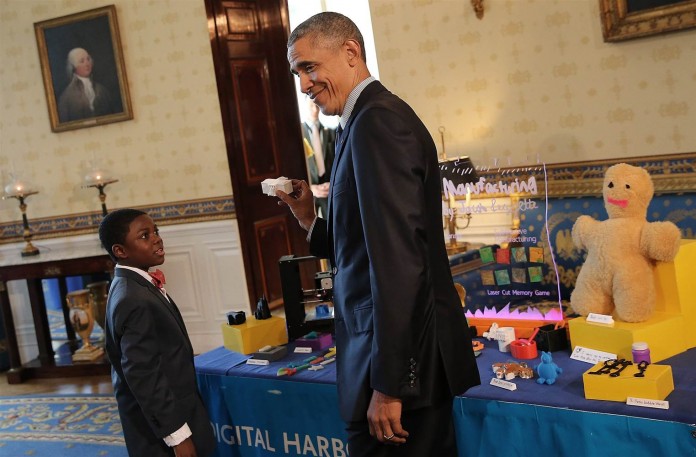 Jacob Leggette’s mother said his childhood has been characterized by impatience. He was grabbing at his father’s iPad as a toddler. At 8, he tried out a 3-D printer at Digital Harbor Foundation, which has youth technology programs near his home in Baltimore, and decided he had to have one.

Not content to wait for Santa Claus, he began writing letters to 3-D printer companies urging them to give him a free printer in exchange for writing reviews of their products. It worked, and the models and toys he built on the machine he got earned him a ticket to the White House Science Fair this week.

“He’s always been driven,” said his mother, Stephanie Leggette, who home-schools Jacob and reminds him frequently that his youth is no barrier to his ambition. She said he sometimes reminds her of a “Simpsons” episode where the children, on a road trip, ask: “Are we there yet?”

Jacob was excited about the visit to the White House on Wednesday, calling it “the best day of my life!” But it was just a part of his bigger plan to get President Obama’s ear. After all, Jacob is 9 now, and his ambitions are grander: He wants to work for the president.

Jacob was one of a group of students who got to personally show Obama his science fair project, a collection of toys and miniatures he made on his 3-D printer. Obama tried out a bubble wand that Jacob made and held a miniature model of the building in which they were standing.

But before Obama could move on, Jacob had an urgent inquiry.

“I have a question, Mr. President,” Jacob said. “Do you have a child science adviser?”

Obama, it seems, was receptive to the idea. In a speech later, he mentioned Jacob by name and suggested it would be good to have a child science committee.

“I should add, by the way, Jacob . . . had a very good idea,” Obama said. “We should have a kid’s advisory group that starts explaining to us what’s interesting to them and what’s working, and could help us shape advances in STEM education.

“Anyway, that was Jacob’s idea,” Obama continued. “So way to go, Jacob. We’re going to follow up on that. Give Jacob a round of applause.”

A child science-advisory committee could fit in with the administration’s goals of improving science, technology, engineering and math (STEM) education in schools, including at the elementary level. The same day Jacob pitched his idea to the president, the U.S. Department of Education released guidance to school districts on how to direct federal resources on increasing STEM education. Obama has also advocated for computer coding lessons in the classroom.

Part of the administration’s goal is to increase diversity in STEM fields, drawing in more women and underrepresented minorities. Jo Handelsman, associate director for science at the White House Office of Science and Technology Policy, said in an interview that the administration is looking at more effective and engaging ways of teaching STEM subjects so that students stay interested.

The president’s remarks left Jacob awestruck, he said in an interview Friday. He thought to himself: “It worked! It worked! It really worked!”

Jacob said he believes it’s important for children to have a say in science education. It’s critical, he said, “to give kids a little more voice in what they do, so they can express . . . what’s working and what’s not. . . . I want the president to know what kids think about science.”

Jacob wants other children to have the same enthusiasm for science that he has, enthusiasm that was generated when he first picked up his father’s iPad as a toddler. Perhaps if every schoolkid had their own computer, there could be more kids like him, he said.

“Science isn’t difficult,” Jacob said. “You just have to find the right type that you like.”