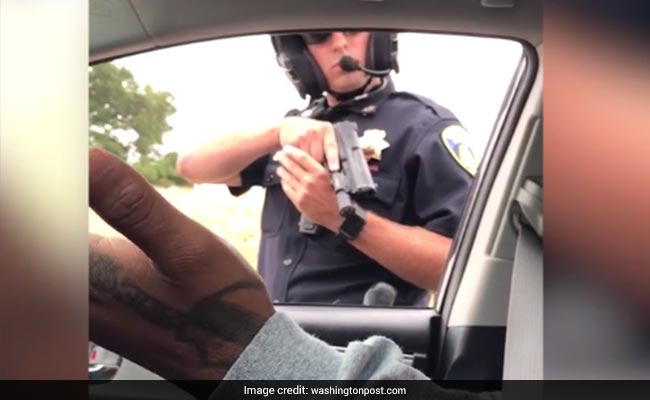 A video taken during a traffic stop in California is drawing debate over the officer’s decision to keep his gun pointed at the passenger for more than nine minutes.

The stop took place last Wednesday morning along U.S. Route 101, south of San Jose, after an officer noticed a car pass him going 85 mph, according to the Campbell Police Department.

After stopping the car for speeding, the officer requested the driver’s license and additional paperwork. The driver and passenger spent several minutes looking for the paperwork before the officer walked back to his motorcycle to write a citation, police said.

It was at that point their stories diverged. According to police, the passenger began reaching “under his seat.”

“It is not clear why the passenger chose to reach under the seat since the officer was not requesting any other paperwork,” Campbell police said in a statement. “Unfortunately, the passenger’s unexpected movement towards the bottom of the seat, caused the officer to perceive a threat and draw his handgun.”

However, a man sitting in the vehicle’s passenger seat – the target of the officer’s gun – maintained throughout the incident that he had simply been reaching for some papers on the floor to try to find the vehicle’s license and registration, as requested.

A video that apparently was recorded by a woman in the car begins as the male passenger is expressing incredulity that the officer has pulled a gun.

The video lasts a little more than nine minutes total, and the officer’s gun is pointed at the male passenger the entire time. Police said in a statement the officer had to wait longer than usual for backup to arrive “and provide assistance in safely resolving the situation.”

“We understand that it is never a comfortable position to have a gun pointed at you, regardless of whether it is a police officer,” police said. “Unfortunately, the length of time that the officer’s gun was drawn lasted much longer than normal based on his location.”

“In the end, the officer had a conversation with the passenger of the vehicle explaining his actions and why the gun was pointed at him,” police said. “The passenger indicated he understood why it happened and actually apologized to the officer. Both the driver and the passenger were issued citations and were allowed to leave.”

Police departments are under increased scrutiny for violent, often fatal interactions with suspects. So far this year, 594 people have been shot and killed by police, according to The Washington Post’s Fatal Force database. Last year, police shot and killed 963 people.