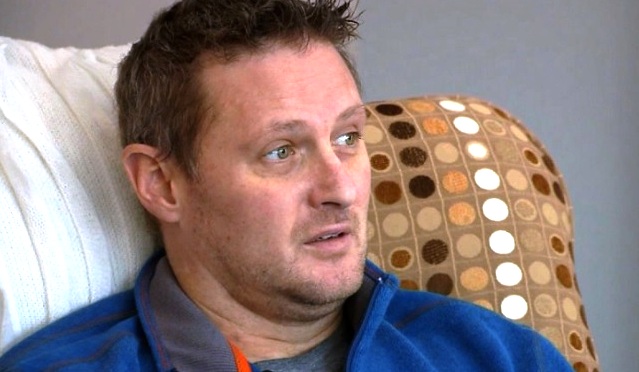 When Kevin Breen first complained about feeling achy and tired, his wife couldn’t help but wonder whether he was trying to wiggle out of a busy day of family responsibilities.

It was a day in December, and Breen – an active 44-year-old whose idea of relaxing is going water skiing on Lake Michigan or playing pickup basketball – is rarely short on energy.

But the Grand Rapids, Michigan, resident insisted he really was feeling ill. And two days after his vague, flulike symptoms had begun, they’d taken on a strange new form: a razor-sharp stomach pain so powerful that Breen could no longer walk.

Julie Breen, 33, took her husband to the emergency room, where initial tests for strep throat and the flu came back negative. Doctors sent Breen home with a prescription for a nausea medication and pain-relieving pills to get him through the next couple of nights.

“They just didn’t work,” the father of three told The Washington Post. “I felt worse the next morning, and I said, ‘We gotta go to the hospital.'”

Breen was no stranger to abdominal pain. He’d endured appendicitis before.

But this was different.

“Something just wasn’t right,” he said.

Doctors soon discovered that something was very wrong with Breen.

He had contracted strep throat; not a typical strain of the bacteria but a rare version that would come close to killing him – eventually claiming his hands and his feet.

A GoFundMe page that aims to help the family has raised nearly $90,000 in less than three weeks. The money will be used to cover medical costs and efforts to help Breen adapt to life without appendages.

When he first arrived at the hospital, doctors had no idea what was truly ailing him. About 24 hours after he was admitted, doctors looked at the results of a CT scan and rushed Breen into exploratory surgery after deciding he may have ruptured his ulcer.

What they discovered shocked and further confused them.

“They opened him up and found 1 ½ liters of infected pus in his abdominal region,” Julie Breen said.

“We met with the surgeon after surgery and she sat us down and said, ‘I’ve never seen this before and I don’t like it,'” Julie Breen added. “‘I don’t know what it is.'”

The physician, Elizabeth Steensma, an acute care surgeon at Spectrum Health Butterworth Hospital in Grand Rapids, said infections of the abdomen are rare – and any time doctors find that much material in someone’s abdomen, it’s usually the result of a punctured organ.

However, doctors couldn’t find any holes, leaving them at a loss for explaining the buildup of pus, Steensma said.

Doctors sent a sample of the material to a microbiology lab for testing. Around the same time, they began to notice a bright red rash on Breen’s torso.

A final clue to his mysterious ailment arrived when Steensma discovered that Breen’s son had recently caught strep throat.

After a culture came back positive for strep, Steensma was able to confirm that Breen had contracted the infection. She said doctors determined that the strep had traveled from Breen’s throat to his stomach. The journey was so unusual, she said, that it had happened in only 32 other cases, most of them involving female patients.

Breen’s strain of strep, she noted, was particularly strong, and his body was unable to defend itself.

“It’s estimated that there are over 1 million cases per year, and this is only the second case that has ever been reported of strep traveling from a male patient’s throat to his stomach,” Steensma said.

Although doctors had identified the problem, Breen’s battle was just beginning. Doctors said his infection caused him to go into severe septic shock; within hours, his body began to shut down. Doctors told Breen’s wife to call family members and let them know her husband might not survive.

“You’re never prepared to hear those words from a doctor,” she said.

Steensma said Breen’s situation was among the most dire she’d encountered as a doctor.

“He had multi-system organ failure and needed a ventilator,” she said. “He had renal failure and acute kidney injury and liver injury and abnormalities in coagulation of his blood clotting. His blood pressure was so profoundly low, he pretty much required maximum doses of three medications to maintain it.”

“He was fighting for his life,” she added, noting that her patient’s kidneys had begun to shut down and that he required a continual infusion of antibiotics.

Although the blood pressure medication was keeping her husband alive, Julie Breen said, it also had a devastating side effect: By redirecting blood flow to his organs, the medication was shutting off blood to his extremities, which resulted in necrosis (tissue death) of his hands and feet.

Breen turned a corner and began to show signs of recovery several days after surgery, Steensma said. By the end of January, he was released from the intensive care unit and transferred to an acute rehab hospital, where he bonded with staff and was able to stop dialysis, his wife said.

Then, this week, he underwent the first of four surgeries to partially amputate both of his feet, his left hand and multiple fingers on his right hand.

“The simple things like getting up from the couch to get a snack or grabbing a tissue to blow my nose – I can’t do those things without help,” he said from home, a day after his first amputation surgery. “It’s frustrating, I’m not gonna lie, but I have hope that I’ll regain my mobility and the ability to take care of myself.”

“I can’t even begin to tell you how grateful we all are that he’s doing so well,” she said. “He’s home with his family. His kidneys have recovered. He’s off dialysis, and he’s regaining his life. That’s the best we could wish for him.”

Before his life-threatening illness, Breen sold life insurance and his wife worked as a fifth-grade teacher. Breen is no longer employed. His wife, who has taken time off work, is now the family’s sole breadwinner.

Jill Breen said she has no idea how the future will play out. But, she added, when her family reflects on the past few months, they’re actually grateful.

“Things are hard, but at the end of the day I have a husband – and my kids have a dad,” she said.

Breen said he hopes to receive prosthetic limbs. And while the coming months may be marked by uncertainly, there’s one thing he knows he wants to do.

“I’d like to be able to water ski again,” he said. “That was a huge passion of mine. I may not be able to do it at the same level, but just getting out there would be special.”