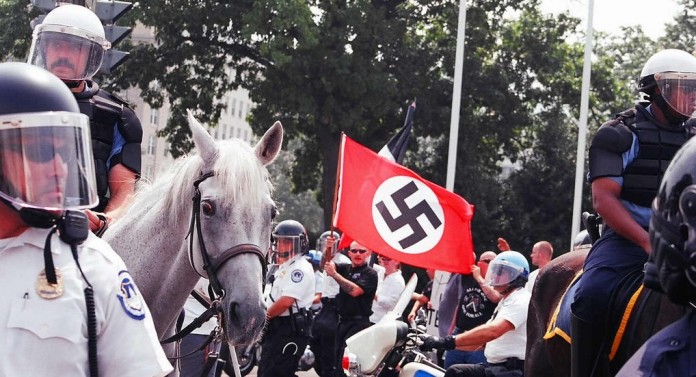 “Wanted: Where do these idiots work?” asked the prompt. It directed visitors to images of some of the 7,000 people that the website’s sponsor, the German art collective called the Center for Political Beauty, or “ZPS” in German, said took part in a right-wing mob that seized the streets of Chemnitz this summer.

The Web page asked members of the public to identify neo-Nazis at the protests, which turned the former industrial hub of prewar eastern Germany into a cauldron of xenophobic anger in the heart of Saxony, where the nationalist, anti-immigrant Alternative for Germany, or AfD, won more than a quarter of votes in 2017, making it the strongest party in the state on Germany’s far-eastern flank. The protests shocked the world, prompting comparisons to last summer’s deadly white nationalist rally in Charlottesville. They pulled back the curtain on resurgent nationalism and racial hatred in a country whose crimes against humanity helped forge powerful postwar taboos.

The art group said it aimed to “give a face to evil,” part of its “Special Commission Chemnitz” campaign launched in response to the furor that erupted in August, when word got out that an Iraqi and a Syrian were suspected of killing a German man in a knife attack. Extremists took to the streets, waving German flags and chasing dark-skinned people.

The street scenes made Philipp Ruch, the founder and artistic director of ZPS, wonder: “Who are these guys?”

The answer to his question was partly supplied by the “guys” themselves. They got trapped in a so-called “honey pot” set up by the left-wing art group, frantically searching their names and the names of associates once ZPS put the results of its initial sleuthing online for all to see.

Ruch now claims his organization will be able to reveal at least 80 percent of the roughly 7,000 people who assembled in Chemnitz. It’s a novel approach to doxing, which has trickled up from online subcultures that thrive on Reddit and 4chan to become a more mainstream, though still controversial, approach to exposing extremists.

ZPS, a self-described “assault team” that “believes that Germany should not only learn from its history but also take action,” is still weighing what to do with the data, and whether to hand it over to authorities. But, “if you ask me,” Ruch offered, “they should lose their jobs.”

“I am convinced that nobody who’s into these anti-democratic forces should ever have a right to work in this society,” he said in an interview with The Washington Post. “There needs to be a shock-and-awe strategy.”

First, he had to find out who they were.

The presence of several hundred identifiable neo-Nazis would be expected, he acknowledged, particularly in Chemnitz, an east German city of about 250,000 with a history of far-right protests mounted at the fringes of society. Ruch comes from Dresden, the state capital and birthplace of the anti-Muslim movement Pegida, a German acronym for a title meaning “Patriotic Europeans Against the Islamization of the Occident.”

The show of force in Chemnitz, however, hardly represented a social fringe. ZPS decided that it required exposure.

“We want to lift right-wing extremism out of anonymity in Germany,” the Web page vowed.

Where did the protesters work? Did they have families? What defined their private lives? What experiences might explain their motive for brandishing a swastika or giving a Nazi salute – criminalized under German law – in broad daylight?

Ruch resolved to find out, believing the danger to democratic society to be as grave as it was in 1945, when the Allied powers embarked on a denazification program that saw the swift dismissal of 42 percent of public officials, though the endeavor faltered and was abandoned within three years.

“The situation is quite the same as 1945,” said Ruch, 37, who has a PhD in the history of political thought from the Humboldt University in Berlin. “We need to do denazification of Germany again – not from the outside, not from the Allies but from civil society, from inside.”

After World War II, the Allies were equipped with the occupying power of their armed forces, as well as the influence of emergent international institutions. Three-quarters of a century later, the tools employed by the activist art group are different.

ZPS has made a name for itself through performance art doubling as political combat, taking on the most divisive contemporary debates. The group, made up of a core of about 30 people, has staged public burials for refugees who perished on the path to Europe. Last year, it installed a replica of Berlin’s Holocaust Memorial next to the home of Björn Höcke, the AfD politician who questioned German guilt for World War II when he decried the place of remembrance as a “monument of shame.”

The projects seek to change the political climate by revealing unspoken truths, Ruch said. “This is the power of art.”

By researching postwar denazification, the artists came to see employment as the pivotal issue. Their aim became to deny jobs to those professing anti-democratic views, banishing them from polite society. Then Chemnitz happened, making urgent this undertaking.

Using “open-source intelligence,” Ruch said, the group decided to “try to identify everybody who was in the streets on these days.”

He said ZPS was able to identify 1,500 people with relative certainty, all by scraping publicly available information, including photos from social media and Nazi blogs, and plugging the findings into facial recognition software. About 50 people worked on the project, Ruch said, which drew on the advice of biometric experts who at first doubted its feasibility.

The techniques were legal, Ruch claimed, though he said he would “recommend to the German government to forbid these technologies. If we can do this as an art group, everybody can do it, including state actors.” What they did next – asking the public to supply the employers of suspected neo-Nazis – may have put them on less firm legal footing, Ruch acknowledged. German privacy protections are notably stricter than those in the U.S.

But 1,500 was only a fraction of the protesters present, ZPS knew.

“So we said, ‘Let’s use the 1,500 names that we have as a weapon to find all the other names, to attract everybody else,'” as Ruch explained the group’s thinking. They built the Web page so that only a small selection of photos appeared at a time, but included a search function for anyone who wanted to test the scope of the findings.

They took their results live last week, announcing the website’s launch at a news conference in Berlin. It drew immediate scrutiny, as the office of Germany’s data protection commissioner said it would analyze the site, according to the Süddeutsche Zeitung newspaper.

But ZPS didn’t need much time. On Wednesday, the group took the page down, replacing the photographs with the celebratory “Thank you, dear Nazis” and an explanation of the stunt. Neo-Nazis had flocked to the site to search their own names, Ruch said, supplying information about their networks, whereabouts and even their employers in the process. The group is still working through the data but believes it could help identify another several thousand protesters at least, Ruch said.

ZPS is most intent on exposing public employees, he added, because they have a duty of loyalty to the constitution.

“We are very interested in information that came from IP addresses owned by the state,” he said. The art collective is also paying close attention to users that stayed more than 10 minutes on the site, and on people who returned multiple times.

He expects to share the findings with investigative journalists and, possibly, with federal authorities. But he is wary, in large part because Germany’s former head of domestic intelligence, Hans-Georg Maassen, questioned without evidence the authenticity of a video of far-right protesters chasing a foreigner in Chemnitz, contradicting the chancellor, Angela Merkel. He was removed from his role in the fallout, but was reassigned as an undersecretary in the interior ministry.

“If we hand it over to the interior ministry, nothing would ever happen,” Ruch said.

Ruch is keenly aware of what he calls the “subtext” of his work: “The ugly Germany is back.” And it has fierce detractors. Just this week, Ruch said, he was forced to leave Berlin because of threats.

Yet, he also takes the name of his group to heart. “We try to reach and achieve acts of political beauty,” he said.

Chemnitz, he predicted, would be the central event for which Germany would be remembered in 2018. His hope, he said, is that the days of violent protest are recalled not just as a new high-water mark for German nationalism but as an alarm bell initiating a new denazification.

“I always believed the promise, ‘never again,'” Ruch said, repeating the mantra of the Holocaust remembrance movement. “But the ground is shifting.”