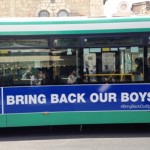 From the moment the news broke out that three Israeli teens had been abducted over three weeks ago, a number of Israeli university students got together to create a major social media campaign entitled #BringBackOurBoys, directing global attention to the kidnapping. The online campaign, which went viral, garnered millions of hits with supportive tweets from such personalities as Gal Gadot, Matisyahu, Bar Refaeli, European parliamentarians and U.S. congressmen.

Emily Neilson and Daniela Traub, both 25, who study International Relations at Hebrew University and Morin Hayo-Hemo, the director of Ambassadors Online academic program at the University of Haifa, sat together shortly after hearing the radio announcement of the kidnapping on Friday, June 12. Within half an hour, the three girls along with a small group of university students who direct various student programs in Israel, created a Facebook, Twitter and Instagram account with the hashtag, #BringBackOur Boys.

“Our objective in the campaign was to raise awareness in the world to what terrorists are doing to our kids, not only Israeli, but all kids around the world,” Emily Neilsen told Tazpit News Agency in a recent interview.

“We particularly wanted to show how in the Middle East, kids are falling victim to extremists that know no boundaries.”

The girls were inspired by the Nigerian campaign, #BringBackOurGirls, which had been created immediately after the kidnapping of more than 200 Nigerian school girls by Boco Haram terrorists.

“When tragedies like this happen, it is when people come together to help and support one another. We must say to these extremists – no to terror and no to using kids to advance extreme and hateful agendas,” said Neilsen.

“Using new media platforms allows us to get our message out to a wider group of people that want to listen and also to those that do not know, and should,” she explained.

The university students worked in shifts to man the computer 24 hours a day, receiving messages full of pictures and support from around the world during the 18 days when the search for the boys was taking place.

“We find that in most cases, when there is a situation like this, Israel is portrayed in a negative light,” said Traub, who managed the Hebrew University Situation Room during Operation Pillar of Defense in a similar social media campaign.

“People are quick to judge Israel’s actions without actually knowing why or what the reasons were behind them. Our goal was to show the world what had happened, raising awareness of the terror attack against the boys, Eyal, Gilad and Naftali, before the international community became quick to judge,” added Traub.

The joint effort of a number of student organizations and the immediate response to the kidnapping was extremely effective in launching the campaign, according to Neilsen. “The Facebook account has over 115,000 likes and the campaign reached nearly 2 million people.”

“We had photos and tweets from British and French Parliamentarians, billboards across America, giant electronic ads in Time Square and elsewhere,” added Hayo-Hemo. The campaign had asked people to post a photo of themselves holding a sign, with the message “Bring Back Our Boys.

Manny Halberstam, a cousin of one of the murdered boys, Naftali Frenkel, 16, was one of those campaign participants in the United States who took part in the #BringBackOurBoys. He recently wrote about the importance of the social media campaign in a Fox News column, stating that “as we accept the cruel reality that our boys and girls never made it home, we might be inclined to think that the time and energy we poured into these campaigns were in vain.”

“In reality, our collective efforts in the #Bring Back Our Children” campaigns achieved an important result: we managed to make people of different walks of life feel so close to one another. The campaigns strengthened our sense of community, tightened our bonds to those with whom we have little in common and deepened the wells of compassion that we feel for strangers who are experiencing suffering,” wrote Halberstam.