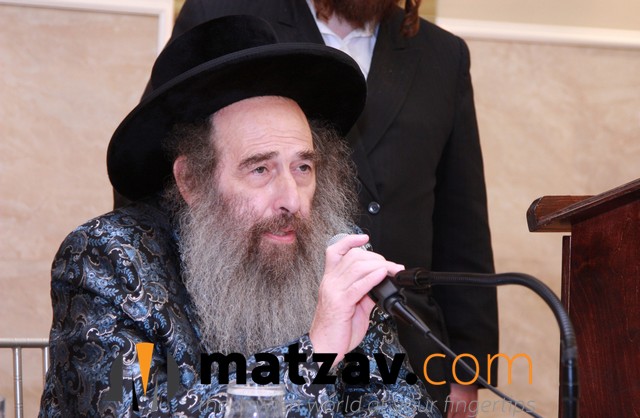 To my precious and holy Jewish family,

Yes, every Jew is my family, for we are truly one family, beloved children of our holy Father and King on high, Avinu Malkeinu HaKadosh Boruch Hu. I write to you before Rosh HaShana 5778 with a most personal message flowing from a heart filled with love and hope for all of Klal Yisrael.

You see, I always thank Hashem for every day of life He has granted me. Like all people, I have lived through good times and bad. I have seen the horrors of the holocaust and the gift of rebuilding families in its aftermath. But I also witnessed many people who had lost faith after experiencing the horrors of that most terrible period in our history.

In fact, I recall what happened to me 70 years ago, in the year 5708 (1948), when I arrived in the United States from Romania. At that time, I was one of the few children in America who wore Payos openly, curled in front. One day, I was walking along the street in Boro Park when a Jew suddenly approached me and pulled on my Payos with tremendous anger. He raged that it makes Jews look bad to display their Yiddishkeit in such a public fashion.

Like many others, this tortured soul distanced himself from religion and tradition following the tremendous test of faith that took place after the horrors of the Holocaust, as well as in the face of the many temptations and lusts presented by life in America.

I dare not judge that poor Jewish brother of ours. I have no doubt he suffered terribly. But it broke my heart to realize that he, and so many of our precious brothers and sisters, had given up on thousands of years of holy Jewish history and turned their backs on Hashem and His holy Torah, the very lifeblood of our nation.

At that time, the predictions regarding the future of Orthodox Jewry were most dire. Most sociologists and psychologists argued that it would be impossible for Jews to follow their ancestral customs against the tide of society. They declared that within fifty years, Orthodox Judaism would disappear in the United States.

Sadly, during that same era, the prospects for a vibrantly growing Torah Judaism in the Holy Land, Eretz Yisrael, was not much better. Unfortunately, many of the Jewish leaders involved in the founding of the State of Israel, harbored animosity and resentment toward our holy religion. They exerted tremendous effort to suppress Torah Judaism from flourishing in the nascent state. They regarded Torah practice as archaic and incompatible with the development of a modern Jewish state. They predicted that within fifty years, Tzitzis and Tefillin would only be seen in museums.

Thankfully, the reality that followed proved them wrong. Against all odds, authentic Torah Yiddishkeit rejuvenated and became stronger and more popular. Torah-true schools, educating boys and girls separately, proliferated. Yeshivos and Kollelim opened for Torah scholars. Tens of thousands of Baalei Teshuvah joined the Torah community. And yes, fifty years after proclamations of its demise, Torah true Yiddishkeit is thriving as evidenced by the Tzitzis and Tefillin proudly worn by hundreds of thousands of Jews in many places throughout the world.

But, the Yetzer Hara is a wily nemesis who comes back to haunt us in new and insidious guises. Over the past twenty years a new temptation and test has arisen to challenge our community. I speak of the internet which has invaded our homes and threatens the sanctity of the Jewish family. Tragically, it introduces our children to false and corrupting ideologies, tempts them with all manner of depravity and has induced many of them to abandon their faith. And once again, experts in sociology and psychology forecast a bleak future for Torah education and Torah observance.

But, I am gratified that we are addressing this latest threat and succeeding in thwarting its damaging influence. With the guidance of leading Rabbis and Torah educators, many thousands of Jewish homes are either outright banishing this menace or installing appropriate means and measures to filter out its corrosive elements. Yeshivos and other Torah educational institutions have survived this latest threat and continue to infuse the light and joy of Torah into the minds and hearts of our precious Jewish children.

This begs the question, how, in fact, did we succeed beyond all logical expectations to create and sustain flourishing Torah life in the United States, Eretz Yisroel and throughout the world?

The answer lies in a fundamental Torah teaching. Our Sages taught: “Haba Letaher, Mesayin Oso” – “one who comes to be purified, is helped (from Above)”!

When we resolve to commit ourselves to following the will of our Almighty Creator, we are given a special Siyata D’Shmaya – help from Heaven to overcome all temptations, obstacles and challenges that would otherwise stand in our way. The critical key, however, is to always maintain hope in Hashem’s merciful beneficence, and never despair.

No challenge to our holy and religious commitments to live our lives in accordance with our precious Torah is insurmountable when we realize that Hashem is always there to help us overcome every obstacle. We can never give in to despair once we understand that the infinite, loving Divine Father and King in Heaven will guide us and strengthen us if we simply dedicate our lives to following the beautiful path of Life He has charted for us through the gift of Torah and Teshuva.

This message is particularly, relevant as we prepare for Rosh HaShana in anticipation of a brand-new year. We must recognize that no matter the challenges we face, we must never lose hope; we must cherish every dear moment of life and seek to make it better.

We explicitly articulate this idea in the special Psalm we recite after davening throughout the high holiday season. After expressing confidence in Hashem’s divine protection, King David concluded Psalm 27 with the following inspirational encouragement, “Kaveh el Hashem, Chazak V’Yaametz Libecha V’Kaveh el Hashem” – Hope unto Hashem, strengthen yourself and He will fortify your heart, and hope unto Hashem.

The obvious question is why the verse repeats the directive to “hope unto Hashem.” But the answer is obvious. The Yetzer Hara keeps coming back with new and ever more difficult tests. This is ultimately how we grow to become stronger, better people. And King David, whose life was a series of tests and tribulations assures us that as long as we maintain hope in Hashem and never give up, Hashem will help us rise to a stronger place.

I have witnessed loss of hope in many young people, and even more adults, who thus hold themselves back from returning in Teshuvah. I saw this clearly when I once visited a high-security prison to give encouragement to Jewish prisoners. Not one of them wanted to think about strengthening their Judaism, because they had given up all hope.

The holy Baal Shem Tov, ZT”L taught that when a Jew falls into depression and despair, the Yetzer Hara regards this as a victory since it becomes very difficult to actualize one’s potential amidst despair. The message of the high holidays is that with the help of Hashem, there is never reason to despair.

On a most personal note, I speak from experience in this matter. Over the past several years I have been suffering from a debilitating medical condition that has drastically impaired my ability to function properly. Many people urged me to slow down my pace and relax. But I have taken to heart the message of hope inherent in these days. I thank Hashem for helping people develop the technologies that allow me to continue His holy work. And as long as I can help another Jew, I will not cease to exert every possible effort to do so.

On Rosh Hashana we sound the Shofar by blowing into a ram’s horn. We show that even if the only thing left we can do is breathe, we can still fulfill the will of Hashem and provide encouragement and hope to another Jew. This confounds the Yetzer Hara who sees that nothing he can do will prevent us from clinging to the path of Torah and Mitzvos.

Additionally, the sound of the Shofar is a rallying call to remain steadfast in our battle against the Yetzer Hara. Though the tests and nisyonos confront us in many ways, we never give up hope. Whether it is the taunts of a tortured soul against a young boy with Payos, or the ravages of serious disease, we must always be “Kaveh el Hashem.”

My dear precious brothers and sisters, take this message to heart, strengthen yourselves always in the holy and precious path of Torah and Mitzvos. Never give up hope. And Hashem will always give you the strength to endure. In this merit, He will bless you all with a new year filled with bountiful joy and blessing. A Gut GeBentched year to all!

Special Thanks to: Rabbi Avraham Shalom Farber and Yehudah Leib Meth, for the Translation