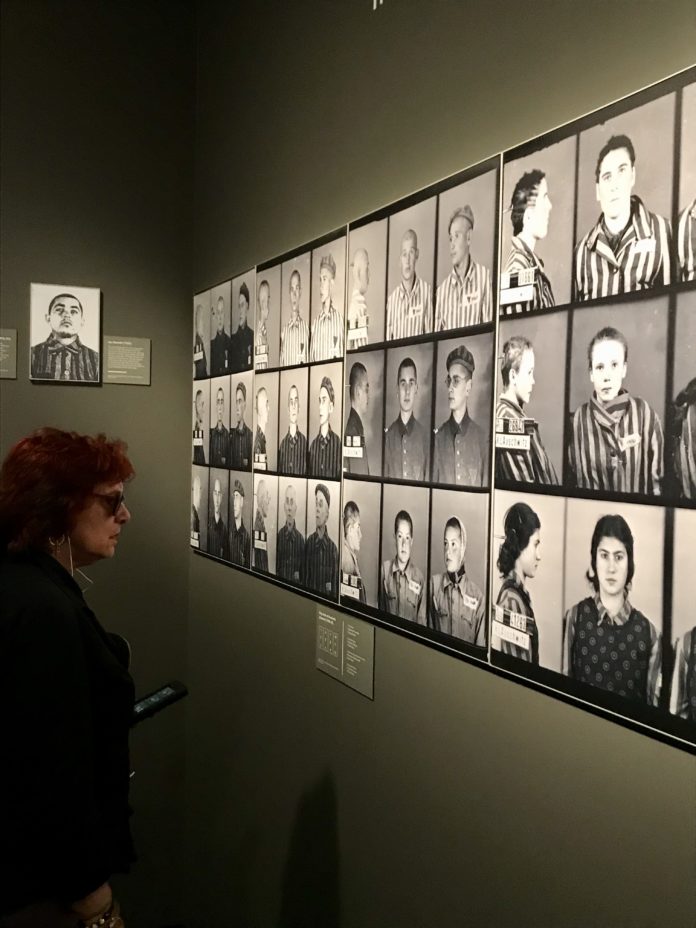 A new exhibit at New York City’s Museum of Jewish Heritage–A Living Memorial to the Holocaust is filled with chilling artifacts outlining the transformation of Auschwitz from a Polish town known as Oswiecim to the largest documented mass-murder site in human history, where 1 million people were killed.

Nearly 20,000 people have already seen “Auschwitz: Not long ago. Not far away.,” the most comprehensive exhibition about Auschwitz ever shown in North America. Seventy-four years after the liberation of Auschwitz, this is the first traveling exhibition in the United States dedicated to the camp’s historical significance. The exhibition opened on May 8, the anniversary of Victory in Europe Day, when the Allies celebrated Nazi Germany’s surrender of its armed forces and the end of World War II in Europe.

Visitors are given a glimpse into the exhibit even before stepping foot inside the museum itself. Outside is stationed an original German-made Model 2 freight-train car used for the deportation of Jews to ghettos and extermination camps in occupied Poland. Inside, the exhibit’s 20 galleries are filled with more than 700 original objects and 400 photographs, mainly from the Auschwitz-Birkenau State Museum.

The artifacts on display are on loan from more than 20 institutions and private collections around the world. In addition to the Auschwitz-Birkenau State Museum and the Museum of Jewish Heritage–A Living Memorial to the Holocaust, participating institutions include Yad Vashem in Jerusalem; the Anne Frank House in Amsterdam; the United States Holocaust Memorial Museum in Washington, D.C.; Auschwitz Jewish Center in Oswiecim; the Memorial and Museum Sachsenhausen in Oranienburg; and the Wiener Library for the Study of the Holocaust and Genocide in London.“Auschwitz. Not long ago. Not far away.” thoroughly details Jewish life and culture in pre-war Europe all the way through the rise of Nazism and the Third Reich, the construction of the Auschwitz-Birkenau camp, deportations, life in the concentration camp, liberation and the ultimate creation of the Auschwitz-Birkenau State Museum.

Among the items in display are mug shots of concentration-camp prisoners, family pictures found in the labor camp and hundreds of personal items, such as suitcases, shoes and children’s belongings, that deportees brought into Auschwitz.

Other artifacts include a prisoner-made chess set and storage box made out of a sardine tin, engraved with “Auschwitz 1943”; a shower head from one of the Auschwitz crematoriums; concrete posts that were part of the fence of the Auschwitz camp; a bunk bed from the prisoner barrack at Auschwitz; a desk and other belongings of the first and the longest-serving Auschwitz commandant, Rudolf Höss; a gas mask used by the SS in Auschwitz; a sales poster for the book Mein Kampf from 1930; a SS helmet owned and used by Nazi official Heinrich Himmler and his annotated copy of Hitler’s Mein Kampf; dreidels and bullets found in mass graves; the trumpet that Dutch musician Louis Bannet played in Auschwitz; visas issued by Japanese Vice Consul in Lithuania Chiune Sugihara, often referred to as “Japan’s Oskar Schindler”; prisoner registration forms and identification cards; and a rescued Torah scroll from the Bornplatz Synagogue in Hamburg, which had its interior destroyed during Kristallnacht in 1938 and was then demolished the following year.

The exhibition arrived in New York City after a run at Madrid’s Arte Canal Exhibition Centre, where it was extended two times, drew more than 600,000 visitors and turned out last year to be one of the most visited exhibitions in Europe.

What hate can do …

Many visitors were visibly moved, and some teary-eyed, upon leaving the comprehensive exhibit in New York City, which takes about two hours to complete. Jessica Joseph, 66, whose mother survived the Auschwitz concentration camp, called the exhibit “very powerful.”

She told JNS, “To me, the most striking thing is that it’s in New York because I think, mentally, when it’s elsewhere and you see an exhibit like this—whether it’s at Yad Vashem or the [Holocaust] museum in Berlin—it’s there, and you’re here and you’re safe and you’re not exposed. And seeing it in the heart of Manhattan … to me, it’s frightening.”

“It can happen again,” added her husband, Leon Kroll, 79, who started tearing up at the end of the exhibit.

Joseph continued saying, “There’s a reality to it that when you go somewhere else and you see an exhibit, and then you take a plane and then you come to the safety of America, which is what all these people did, and seeing it here—it caught me off-balance. It’s extremely powerful to see tangible artifacts as opposed to stories.”

When asked if she thinks others need to see the exhibit, Joseph replied “yes” and explained, “It’s important for people who don’t know about it. It’s important for the younger generation. I was just thinking that all our children work; it’s very hard for them to find time to go to museums. And I was thinking, I’m gonna volunteer to babysit for all the children at different times, so that each one of them can go and spend freely time here because they need to see it. And non-Jews need to see it—especially now, at the times that we’re living in. There are many things that resonated politically with what’s going on today that’s terrifying.”

“Frankly, survivors don’t need to learn the lessons,” he said. “It’s everybody [else] who needs to understand and not accept that this cannot happen again. We want younger people, all people to realize that hate, which can manifest itself like this, is something you must constantly be opposed to.”The museum’s president, Jack Kliger, told JNS that when the exhibit was in Madrid, almost 50 percent of the attendees were under the age of 40. He wants to attract the same young crowd at the New York presentation. He added, “I hope that people will learn and realize that it was not so long ago, and really this is what hate can do. Not only what hate did, but what hate can do. We particularly want younger people—many of whom don’t even know what Auschwitz means—to learn the lessons to never forget and teach their children.”

In connection with the exhibit, the Museum of Jewish Heritage hosted an event with Nobuki Sugihara, son of the late Chiune Sugihara, a Japanese diplomat serving in Lithuania who risked himself and his family to issue transit visas to Jews trying to flee Nazi-occupied Europe. He helped rescue 6,000 Jews.

Nobuki spoke of his father’s heroic acts and met nearly 170 “Sugihara visa” survivors and their descendants, who thanked him for his father’s efforts. Some even brought their original transit visas with Chiune’s handwriting on them, including Nathan Lewin, 83, who was 4 when Chiune issued travel visas for him and his parents to go from Eastern Europe to Kobe, Japan.

Rachel Rappaport’s late father was given a transit visa by Chiune and traveled to Shanghai, where he joined the Mir Yeshiva, which was founded in Lithuania and was the only religious school in the region that had most of its students, as many as 300, survive the Holocaust. The students relocated to Shanghai, taught religious classes and remained there until eventually moving to Jerusalem or Brooklyn, N.Y., where they reopened branches of their school.

Rappaport’s father moved to Israel from Shanghai, had 13 children and now boasts more than 100 grandchildren, all because of Chuine’s travel visa. “Thank you so much really for giving us this life,” she told Nobuki. “Without him, we would not be here today.”

During his talk at the museum with journalist Ann Curry, Nobuki debunked stories told about his father—for example, one regarding Chiune throwing out signed visas from the window of the train he was taking to Germany after being forced to leave his post in Lithuania. Another story that Nobuki said never happened was about his father giving his consular seals to refugees so they could continue making visas on their own after he was forced to leave.

Nobuki encouraged people to educate themselves about the Holocaust and preserve the stories correctly with only facts, not exaggerations. He told the crowd to focus on the truth about what took place in Nazi-occupied Europe.

“Auschwitz: Not long ago. Not far away.” runs through Jan. 3, 2020, at the Museum of Jewish Heritage–A Living Memorial to the Holocaust in Lower Manhattan. The exhibition is intended to tour other cities around the world; destinations will be announced by Musealia and the Auschwitz-Birkenau State Museum.