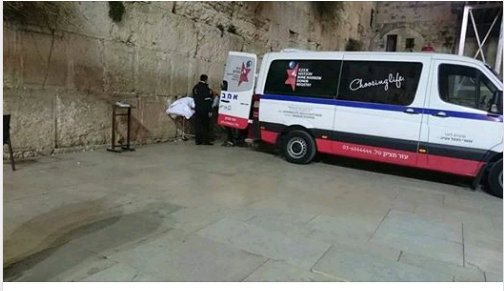 He was ten years old. Every child knows that after ten comes eleven. It is as certain as night following day.  For a small number of children, though, it may not be. These children, too mature to have the devastating information hidden from them, yet oh so young, oh so pure …these heilige neshomos … have risen to madreigos unimaginable to their peers.

The cancer had almost paralyzed him. His breathing was shvach and oxygen was necessary to keep him alive. He lay there, more neshoma than guf. But what a neshoma! This young child, whose thoughts should be on collecting Rebbe cards and his latest chol hamoed trip, had one wish: to daven at the kosel in order to  come closer to the Borei Olom, perhaps for his last time as a bosor v’dom.

Ezer Mizion, who had been helping the boy and his family in so many ways, heard his request. What Yiddishe heart could remain passive? He was so weak that he could barely utter his entreaty.  Logically, it made no sense. But since when does logic enter into the picture when a neshoma is crying?

The first step was consultation with the physicians handling his case. These hardened medical people, normally inured to emotion, found themselves inexplicably moved and surprised even themselves by joining the Ezer Mizion staff in finding ways to make it happen. And so step number one was accomplished. The doctors would give the ok but only if a myriad of logistics could be met.

Over the years, Ezer Mizion has developed relationships with many authorities. Now was the time to make use of them. It would be necessary to drive all the way up to the kosel, normally forbidden by law. An area would have to be legally completely cleared since his immune system was compromised and he could not be placed in a crowd. In short, the logistics were tremendous and a miracle was needed.

There were phone calls, emails, in-person meetings with the top people at the Police Department, the Border Police, the Authority of Holy Sites, the Western Wall Authority. The passionate pleas of Ezer Mizion staff moved many ‘immovable walls’ and, bit by bit, plans fell into place. A small amount of time was set aside at the kosel for the boy, about thirty minutes.

Now the tension only increased. Would his condition allow him to go on the appointed day? If not, the whole procedure would have to begin again. A timely arrival was essential. Would hospital personnel cooperate so that he can leave in time? So many factors. So many places for things to go wrong.

Soon there he was. Ensconced in a stretcher in an Ezer Mizion ambulance. It was a special ambulance, donated by the well-known Farajun family of Toronto, used mainly for Make-A-Wish trips. Not only was it equipped with medical needs but it also boasted lighting, music, videos – so much to make even the traveling part of each Make-A-Wish trip enjoyable. It is in use daily for the octogenarian who hasn’t visited her sister in years, for the holocaust survivor who wanted so much to make a brocha on seeing the ocean, for the small cancer patient whose dream it was to see the police station and now for this precious ten year old child.

The Hand of HaKodesh Boruch Hu smoothed the way. Soon the miracle actually happened and there he was, lying on a stretcher inches away from his beloved kosel. With the help of the trained Ezer Mizion drivers, he was able to turn to the side, reach out and kiss the stones. A kiss that resounded in the shomayim as the tears of the malachim mingled with those on the plaza who were watching from afar. A neshoma had come home.