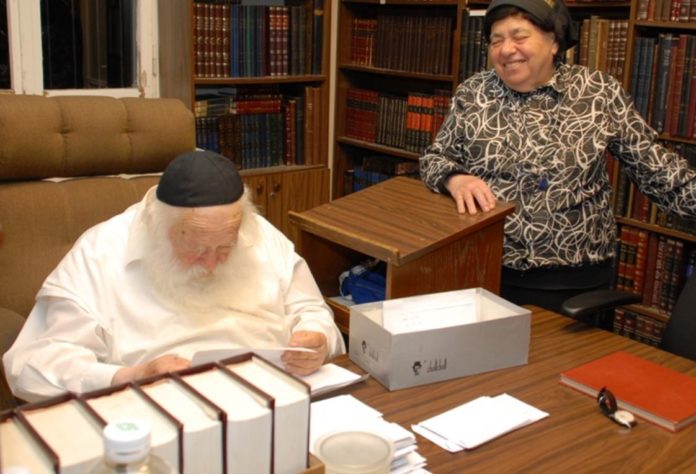 A typical day in the home of Rav Chaim Kanievsky is truly a sight to behold: From the early morning hours, Jews from around the world huddle up the winding staircase which leads up to the front door of the Rav. Once they enter the threshold, they find themselves in a narrow passageway lined with seforim. It is a chaotic atmosphere, as individuals prepare their kashas in learning, stories of suffering, and shailas for advice. Once they arrive at the feet of the ‘Sar HaTorah’ as the Rav is belovedly known, they have a brief but often meaningful encounter. Rav Kanievsky’s time is precious, and most receive only a fleeting glimpse. Occasionally, however, someone’s story is so moving, or their need so urgent, that they gain extended audience with the Rav and his gabbaim. Even more rarely, Rav Kanievsky takes time from his hectic schedule to write a handwritten letter on behalf of an individual. This happened this week, when an individual whose identity is being concealed for privacy reasons received a written endorsement from the Rav, which read as follows:

“Our friend, who involves himself with the needs of the public, has encountered much hardship. He is suffering terribly,” begins the Rav’s signed statement.

Rav Kanievsky then calls on each member of the Jewish people, “because [the individual] has dedicated his life to klal yisroel,” to unite in helping them financially during this time of need. Though the minute details of the individual’s situation are not disclosed, one can only imagine that with the tremendous amount of suffering and poverty which Rav Kanievsky is made aware of on a daily basis, in order for him to write a personal request in this way, the matter at hand must be truly urgent, and the individual in question truly trustworthy.

This takes a different format than many other online tzedaka campaigns, which have resorted to using photos and video footage of those in need in order to help donors connect on a personal level. This has opened discussion as to whether or not these images are necessary, and whether or not a tzedaka campaign can succeed without divulging all information. In fact, research shows that campaigns without images tend to raise drastically less money.

Those close to the individual referred to in the letter hope that the public show of support from Rav Chaim Kanievsky, together with the general Jewish principle of attaching oneself to the gedolim, and the Rav’s blessing for those who donate, will be enough to motivate readers around the world to save someone who is truly in urgent need.

CLICK HERE TO READ THE FULL LETTER TO THE PUBLIC