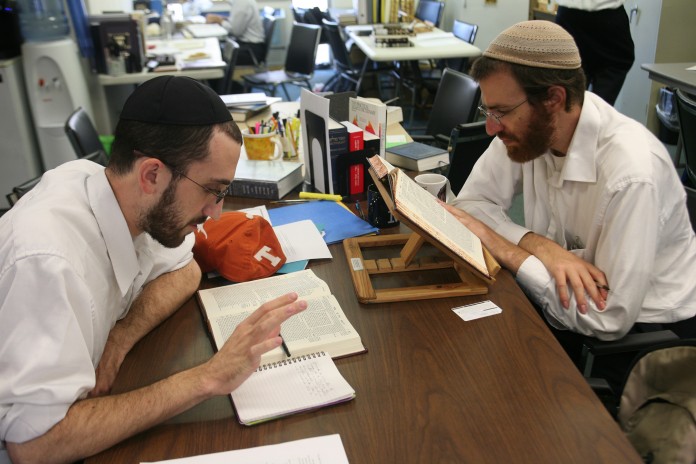 These guys have guts. They took a principled stand, rejecting many of the messages emanating from Open Orthodox senior leadership, and they valiantly put their beliefs on the table, reaching out to the broad Orthodox community:

We, the undersigned musmachim (rabbinic graduates) of Yeshivat Chovevei Torah became rabbis because we felt and still feel a passionate love for Judaism, Torah and the Jewish people. We love the beauty and vibrancy of Modern Orthodoxy and have no desire to start a new denomination or break away from our Orthodox community…

We are grateful for the learning, education, and training that we received, all of which have enriched our lives and our rabbinates. Feeling like a family, however, does not mean that we all agree all of the time. We have therefore felt it necessary to clarify our stance on two critical issues: Torah miSinai (the Divine authorship of the Torah) and Partnership Minyanim. We should add that we believe that many in the YCT community share our values and the positions we express below.

We are committed to the principles of faith as understood by the Rishonim and Achronim (medieval and modern authorities) and accepted by the Orthodox community. We believe the Torah is Divine. We believe that the Written and Oral Torah were given by God to Moshe and that is the same Torah that we have in our midst. This is a sine qua non of Orthodoxy. Nothing different has ever been taught or suggested by our rabbeim (rabbis). The Torah connects us to previous generations; to our ancestors who experienced the Revelation at Mount Sinai. This ultimate transformational moment is inextricably linked to our practice ofhalacha (Jewish Law) and engaging with God’s Will in this world. It is the foundation of our values and morals; our rituals and traditions; it touches our very souls when we hear the words of the Ribono Shel Olam(Creator of the world) speaking to us through the Torah.

The question of Partnership Minyanim is more complex. We do not believe that holding a minority halakhic position arrived at with yirat shamayim (fear of Heaven), intellectual honesty and rigor should place a person outside Orthodoxy. Further, we wish to affirm and uplift the motivation of men and women who are searching for an increased connection with our Creator. Their desire to enhance their relationship with God resonates with us deeply. However, we do not and would not attend a Partnership Minyan, nor would we sanction them within institutions where we are the legal authority. We do not believe that a consensus of poskim (halakhic authorities) currently exists to allow a departure from existing norms.

Some rabbis and scholars have written important opinions arguing that from a halakhic perspective such practices may be technically permitted.  While we cherish the authors of some of those opinions personally, as well as valuing them in the spirit of eilu v’eilu divrei Elokim chaim, (“These and these are the words of the living God”), we follow the serious concerns that were voiced by HaRav Gedalia Dov Schwartz shlita and HaRav Yehuda Herzl Henkin shlita on this matter, and we, together with many of our colleagues, musmachim of YCT, RIETS, and other rabbinical schools, are deeply uncomfortable with Partnership Minyanim and their place within the Orthodox community…

This letter is incredibly revealing, as it evidences a serious split, or perhaps a mini-rebellion, within Open Orthodoxy.

Many of us read the recent interview with Rabbi Herzl Hefter, founder and head the Har’el Beit Midrash co-ed ordination program (curriculum here). Rabbi Hefter, who (along with two female rabbis he ordained this year) serves on the YCT advisory board, made some pretty interesting statements during the interview:

Q: Would Rabbi Lichtenstein and Rabbi Soloveitchik have agreed with what you’re doing?

A: We have to free ourselves of this terminology of heresy. Two years ago there was a huge controversy amongst Orthodox Jewry in the US. Someone wrote that one can accept the assumptions of biblical criticism while still remaining a believing Jew – and there was a huge outcry. Everyone said that that was heresy, and instead of dealing with the actual claim, all they talked about was the question of whether it’s permissible to believe in it. I went wild. You’re going to tell me what I’m forbidden to believe? The question is what you believe in; what’s worth believing in. People are afraid to ask that question, because the moment you ask it, perhaps that means that you don’t believe in the Torah. But that’s the real heresy – the fear of asking yourself what you really believe. Not what you’re supposed to believe – forget about what you’re supposed to believe – but what do you believe?

Rabbi Hefter admits that his program contravenes the teachings of his rebbeim (Rabbi Soloveitchik and Rabbi Lichtenstein believed in rabbinic autonomy within the system, but not when it came to fundamentals or a breach of the system), he argues that one cannot be told what to believe (not sure how he squares this with perek 3 of Rambam’s Hilchos Teshuva, which provides halachic categories for various nonbelievers, or how he squares this with Rambam’s Hilchos Yesodei Ha-Torah, which commands specific beliefs as cardinal principles of Judaism), and he references the Zev Farber controversy, in which a YCT graduate publicly denied the Singular Divine Authorship of the Torah.

Rabbi Hefter himself wrote that one need not believe that the Torah was dictated to Moshe via oral prophecy:

It is possible, then, to accept that the Torah in its current form is the product of historical circumstance and a prolonged editorial process while simultaneously stubbornly asserting the religious belief that it none the less enshrouds Divine revelation.

Another article by Rabbi Hefter, entitled “Why I Ordained Women“, in which he presents a new theology that effectively renders Halacha a subjective, man-made enterprise, was highly lauded by the president of YCT:

Rav Herzl Hefter is thoughtful and brave and a first rate Talmid Chacham. I view this article — and even his bold act of ordaining Orthodox women rabbis — as the continuation of a process started at Sinai of understanding Torah and our relationship to revelation and Hashem’s word. This is not the end of the conversation. In fact, Rav Hefter writes this powerful piece to involve us all in this important discussion. I am so happy our students at YCT get an opportunity each year to learn from this great man.

Another senior YCT leader wrote regarding belief in the factual truth of the Torah:
We need to debate what heresy is, not whether it is allowed… A promising direction is to revisit the philosophical meaning of “belief,” and examine to what degree religious belief can be understood as being a-factual; a faith-proclamation, not a factual postulate. Defining belief as a-factual would allow a person of faith to “believe” religiously in the historicity of the biblical narratives and at that same time entertain the postulates of Bible critics.

The only Orthodox institution in the country that seems open to the minyans is Yeshivat Chovevei Torah, the liberal Orthodox rabbinical seminary in Riverdale. The founder of that school, Rabbi Avi Weiss, long has stirred controversy for his positions on women’s issues: He ordained the first Orthodox clergywoman several years ago and has established a yeshiva for ordaining women as clergy. His synagogue, the Hebrew Institute of Riverdale, has allowed partnership minyans to take place in the building.

“There’s a lot of disagreement about it, but it’s well within Orthodoxy,” Lopatin said. “It’s just not normative yet.”

“People in partnership minyanim are courageous — they want to be part of Orthodoxy, they’re keeping the mehitza, don’t let women do everything, veryyirei shamayim[fearing God]. They want to do the right thing and it’s slowly catching on.”

Lopatin says he would definitely rely on the scholars who have checked the halachic questions involved and has participated in several minyanim.

“I consider partnership minyanim, with a mehitza, within the fold of Orthodoxy: They’re following halacha and following the psak [legal position] of a recognized halachic authority. Partnership minyanim are definitely part of the Orthodox world,” he says.

(Just also posted: “… Partnership minyanim are part of the rubric of Orthodoxy and have legitimate opinions (perhaps minority opinions) to rely on. I personally attend and participate in Shachar, the local Riverdale Partnership minyan – along with my entire family.” And: Regarding partnership minyanim, Rabbi Asher Lopatin, president of YCT, reaffirmed the school’s stance: “We at the yeshiva fully support our students davening in all halachically appropriate minyanim of their choice, including partnership minyanim.”)
I wish the 11 brave YCT graduates who signed the open letter utmost success with their mission. But it will be tough, as they are clashing with public positions of senior Open Orthodox leadership, cited above and elsewhere. And how will the issues of ordaining women rabbis and legalizing gay marriage, supported by Open Orthodox leadership, among a host of controversial positions in many other major areas, pan out?

This may be the beginning of a watershed moment in American Orthodox history. I pray that the outcome is positive.

This article first appeared at Cross Currents and is republished on Matzav.com with the author’s permission.