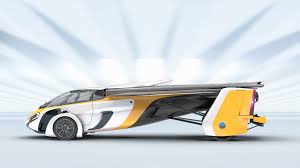 A Slovakia-based startup has tossed its hat into the very nascent field of flying cars. AeroMobil unveiled the final, commercial design for its flying car at the supercar show Top Marques Monaco on Thursday. But the vehicle won’t come cheap; AeroMobil says it will cost between €1.2 million and €1.5 million ($1.3 million and $1.6 million), with deliveries beginning in 2020.

The reveal comes at a time when several companies have expressed an interest in developing flying cars, such as Uber and Zee.Aero, a secretive company funded by Google co-founder Larry Page.  But unlike Uber and Zee.Aero, AeroMobil is launching a true flying car that can both drive on the road and hit the skies.
Most companies are pursuing VTOL (Vertical Take-Off Landing) aircrafts, which, like the name implies, allow the aircraft to take off vertically without needing a runway, but aren’t meant to be driven.
Read more at BUSINESS INSIDER.
{Matzav}