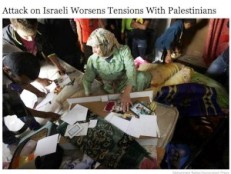 They say that a picture is worth a thousand words. So when The New York Times elected to illustrate a story about the brutal murder of a teenage Israeli soldier with a picture of the killer’s mother, I wondered precisely what words were conveyed.

Of course, as has been well documented, the New York Times’ Israel problem goes far further than photographs. But pictures are extremely powerful as a means of communicating messages. Here is what the New York Times, subtly and by implication, conveyed to its readers:

1. The headlines about the murder of most Israeli media outlets were accompanied by an image taken from the Facebook page of the victim, Eden Atias. Smiling, cherubic, Eden looks like any other cheeky teenager ready to take on life. Brutally stabbed to death as he slept on a bus, that life was abruptly ended. By declining to show the image of Eden’s grinning face, The Times moved the reader a step away from the crime. Atias became a faceless IDF soldier, unwittingly carrying the projected baggage that comes with that title. The Times redirected viewers from the brutal horror that occurred and by consequence, from what obviously inspired the act. Atias was stripped of his humanity and his inherent right to be remembered as a young innocent human being whose only crime was that he was Jewish.

2. The picture of the killer’s mother, obviously distraught, tells another story. By contrast, through his mother, the killer has been humanized. He has a mother just like you and me, and his mother is pained by what her son has experienced. The reader is implicitly invited to ask about what possible grievances may have prompted the murderous deed. The reader is directed down a path of inquiry that seeks justification and exoneration on behalf of the terrorist. He is accorded in his crime what his victim was not accorded in death: humanization.

3. Even further still, by showing the image of the killer’s aggrieved mother, The Times is also pointing a finger by implication. Along with the story’s headline and lede, the message is quite overt: Israeli building in Judea and Samaria is the cause of Palestinian Arab grief, and it is that dissatisfaction that spurs acts of terror. The rabid and incessant drip of hateful propaganda that Palestinian children are infused with from the cradle is absent from the scene. With its image, The Times has subtlety assigned guilt. The accused is the dead teenager and what he stands for, and the real guilty party is masked by the human image of a distraught mother. The image serves as a fig leaf for the unforgivable crime of anti-Jewish incitement.

True, The New York Times Public Editor, Margaret Sullivan, responded to the incident, but only because the public outcry was too widespread for the paper to ignore. “Hundreds of readers wrote to me in recent days to protest the prominent use of a photograph that accompanied an article in The Times last Thursday,” wrote Sullivan in a column Tuesday.

But Sullivan’s response was significantly lacking. Attempting to pawn the incident off as a one time mistake made by a “less-senior picture editor,” she concluded that “The prominent use of this photograph was a case of getting it wrong.”

But the New York Times is a serial offender.

In August of this year, the paper featured a photo spread of Palestinian Arab youths who regularly throw stones at Israelis. Absent were images of the killed and maimed victims of this practice; only vulnerable images of young Palestinian teenagers and their families.

In March 2012, the paper published a front page image of aggressive looking Israeli soldiers firing rubber bullets at protesters, failing to mention that the rounds were not live, and that the photograph was a month old; again The Times chose to portray Israelis as perpetrators.

In 2002 during the second Intifada, the Committee for Accuracy in Middle East Reporting in America (CAMERA) conducted a two week study of Times photographs and found the following:

“During the period of the analysis, the Times presented a total of 18 photographs of Israelis (not including those of Israeli leaders). Of these, 7 presented the aftermath of suicide bombings and only 2 appeared on the front page.

In sharp contrast, there were 45 photographs portraying Palestinians as victims, Israelis as aggressors, or Palestinian suicide bombers and their families, 11 of which appeared on the front page (not including photographs of Palestinian leaders).”

There is an endemic problem with New York Times coverage of Israel. But today, with the proliferation of social media platforms, the paper can no longer hide. Every time the photo editors mess up, readers will call them to task. The New York Times has a choice, get it right, or lose every last semblance of credibility on matters relating to the Jewish state.

The author is the Editor-in-Chief of The Algemeiner and director of the GJCF and can be e-mailed at defune@gjcf.com.