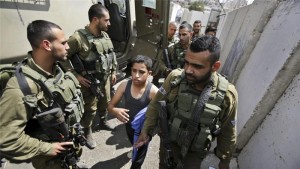 Palestinian Authority President Mahmoud Abbas has warned of the “risk of a new Intifada,” as clashes between Palestinians and Israeli forces in occupied East Jerusalem continue.

In recent weeks, tensions have turned violent on the Har Habayis.

“What is happening is very dangerous,” Abbas said on Tuesday, after a meeting with French leader, Francois Hollande in Paris.

Abbas called on Israeli Prime Minister Bibi Netanyahu to “stop” the chaos at the holy site, claiming that it will result in “a new Intifada, which we don’t want.”

Checkpoints connecting East Jerusalem with the rest of the West Bank were closed off by the Israeli army.

“People are scared because the police and settlers have a heavy presence everywhere, but especially in the Old City, near Al-Aqsa,” Rashad Shtayyed, a 27-year-old resident of Jerusalem’s Wadi al-Joz neighbourhood, told Al Jazeera.

“Others worry that [Israel] will try to partition the mosque compound,” Shtayyeh added.

“[Israeli] forces are present in huge numbers, and there have been a lot of arrests in the [Palestinian] neighbourhoods,” added Shtayyeh.

Several Joint List MKs, who have been quite vocal in their attacks on Israel’s attempts to defend itself against the Islamist extremists violently rioting on the Mount, issued threats as well.

MK Jamal Zahalka said that “attacks on the Al-Aqsa Mosque have reached a dangerous point, in which no one can remain neutral. The occupied interior will generate furious actions at the end of the month when a wave of Jews come to Al-Asqa on Sukkot.”

MK Ahmed Tibi, meanwhile, warned that “[Prime Minister Binyamin] Netanyahu is playing with fire…Continued aggression against the Palestinians and their holy places will inflame a third intifada.”