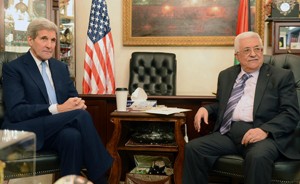 In his meeting with Secretary of State Kerry, PA head Mahmoud Abbas declared that the Palestinian Authority demands that Israel should maintain the status quo in the holy places in Yerushalayim.

“First Israel has to act before we do anything,” he stressed.

Abu Mazen’s meeting with Kerry included accusations against Israel. After the meeting between the two on Shabbos in Jordan, Abbas called on “Israel to stop its aggression.” The Palestinian Authority claimed that Kerry stated that “he is pressuring Israel to make some steps.” Meanwhile, Abbas continued to lay the blame for the wave of terror on Israel.

Abu Mazen’s spokesman, Nabil Abu Rudeineh, said after the meeting that Abbas told Kerry what the Palestinians demanded from Israel: preserving the status quo at Al-Aqsa Mosque. The Palestinians also demanded that the “settlers would stop their attacks in the west bank.” According to the Palestinian spokesman, the Israeli measures “should take place before any step on the Palestinian’s part.”

Abbas also stressed at the meeting that the Israeli government needs to adhere to the Oslo agreements, the same agreements that Abu Mazen stated that he is no longer committed to them. “We will see whether the Israelis would take these serious measures, and then we can deal with the situation,” he concluded. Also present in that meeting were chief negotiator Saeb Erekat, Nabil Abu Rudeineh and head of the Palestinian general intelligence Majid Faraj.