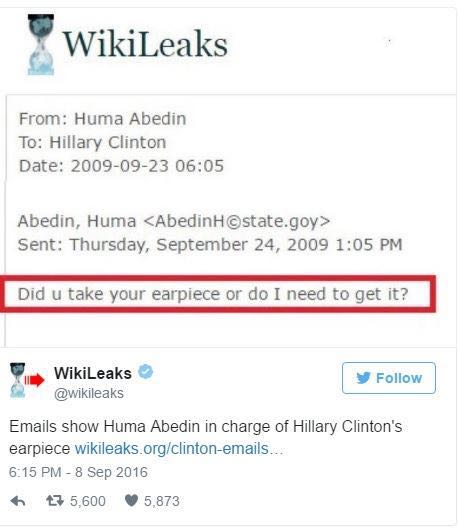 Top Hillary Clinton aide Huma Abedin said that Clinton was “still not perfect in the head” in a 2015 email leaked by WikiLeaks, Chandler Gill reported for Washington Beacon on Wednesday. Abedin also said that Clinton had to “stick to notes” during an event for this reason.

The exchange came at the end of a discussion among staffers about how Clinton would address then-GOP candidate Jeb Bush’s use of Super PAC money to fund his campaign. It is unclear whether Abedin was referring to a serious illness or another issue with Clinton.

Abedin was responding to an email from Clinton’s communications director, Jennifer Palmieri. “Yes. If she feels need to address Jeb directly–would suggest the pivot,” Palmieri wrote, referring to remarks the Clinton team was preparing. “She’s going to stick to notes a little closer this am, still not perfect in her head,” Abedin responded.