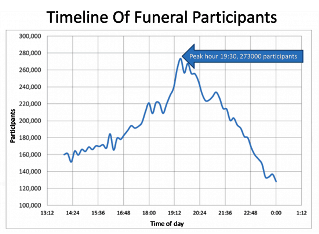 According to Israeli police reports, up to 800,000 people were at the levaya of Chacham Ovadiah Yosef zt”l.

Most Israeli chareidi outlets had the estimate at about a million.

However, in addition to the secular media in Israel trying to downplay the crowd size – no surprise there – an Israeli high-tech start up named Trendit claims the number of people actually attending the funeral was 273,000, just 34% of the police figure.

Trendit gathers real time cellular phone data in a predefined area, and by cross-referencing the raw data with demographic and statistical data, is able to generate what it calls, Population Analytics. At the core is the simple notion that people carry their cellular phones with them all the time, therefore enabling the mapping of population movement.

Trendit’s research has already featured in the press during the “social protests” two years ago.

Yesterday, less than 24 hours after the levaya, Trendit published on LinkedIn and Twitter their research on the number of people at Rav Yosef’s levaya. By their count, there were “only” 273,000 people, a figure that seems way off base considering the reports from numerous sources – including police and emergency personnel – stating that the minimum was 600,000.

As of March, Israel’s population stands at 8,012,000, with roughly 75%, or 6 million of them Jewish. Given that the vast majority of levaya goers were men, that means that roughly 25% of Jewish males attended the funeral, or 1 in 4.

Further exploration of the data shows the participants’ origins:

This data show that there’s a discrepancy of half a million people between the Israeli Police and Trendit. While there’s no reason to doubt the police figures, estimated by the number of buses and crude head count, it might be an overestimation, as has already happened with big rallies in Israel. Then again, Trendit’s data might be an underestimation due to a number of reasons:

First, Trendit uses mathematics and computer algorithms to extrapulate the data, and is only accurate to a certain degree.

Furthermore, chareidim are a difficult demography to monitor due to different norms, including a ban, to a certain extent, on mobile phones. Though Trendit may know their demographics, it is worth remembering that unlike Tel-Aviv social justice protests, not everyone has the most up-to-date iPhone or Android mobile phone.

And then there’s the inherent problem of scale. Just what is a funeral procession? Is it only the people in a certain radius from the grave? Does it include all the people along the path of the procession? What about the people stuck in traffic that, although partaking in the funeral, couldn’t physically make it close enough in time?

Trendit allows customers to define an area for monitoring, which is usually fixed around a focal point. Funerals move through space, and are highly irregular. Then there’s the issue of cell tower migration and system overload, which might also interfere with the data collection.

Media estimates are notoriously unreliable at times, but between the probable overestimation of a million and the absolute underestimation of 273 thousand, Rav Yosef’s levaya saw one of the biggest crowds ever. Our sources say that it is far close to the million mark than Trendit’s “fabricated numbers,” one source called it.