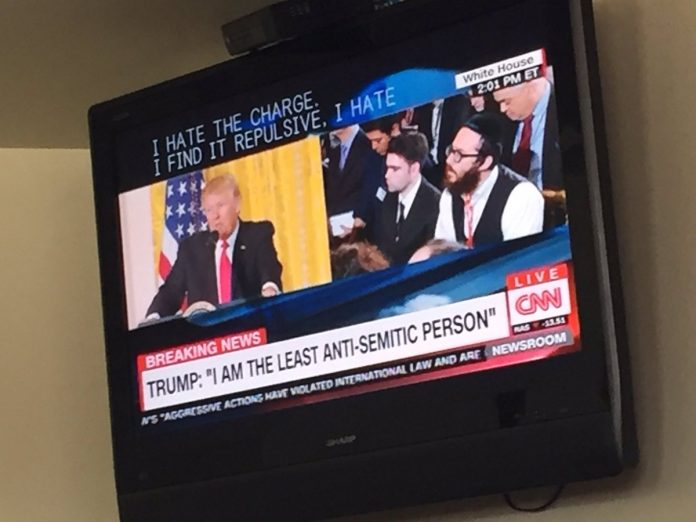 The Anti-Defamation League (ADL) is now weighing in on the story first reported online by Matzav.com of President Donald Trump’s response to a question posed by frum reporter Mr. Jake Turx Turkeltaub of New Jersey regarding an uptick in anti-Semitic incidents across the country, including recent bomb threats made to Jewish Community Centers (JCCs).

At a press conference at the White House in Washington, DC, today, Turkeltaub, said, “Despite what some of my colleagues may have been reporting, I haven’t seen anybody in my community accuse either yourself or any of, anyone on your staff of being anti-Semitic. We understand that you have Jewish grandchildren. You are their zaidy. However, what we are concerned about, and what we haven’t really heard being addressed, is an uptick in anti-Semitism and how the government is planning to take care of it… There has been a report out that 48 bomb threats have been made against Jewish centers all across the country in the last couple of weeks.” said Mr. Turkeltaub. “There are people who are committing anti-Semitic acts or threatening to…”

Trump cut off Turkeltaub and responded that he is “the least anti-Semitic person that you’ve ever seen in your entire life. Number two, racism, the least racist person. In fact, we did very well relative to other people running as a Republican… [Quiet, quiet, quiet.] See, he lied about, he was gonna get up and ask a very straight, simple question, so welcome to the world of the media. But let me just tell you something…that…I hate the charge. I find it repulsive. I hate even the question, because people that know me… And you heard the prime minister, you heard Netanyahu yesterday. Did you hear him, Bibi? He said, ‘I’ve known Donald Trump for a long time…’ …So you should take that instead of having to get up and asking a very insulting question like that.”

“On two separate occasions over the past two days, President Trump has refused to say what he is going to do about rising anti-Semitism or to even condemn it. It is mind-boggling why President Trump prefers to shout down a reporter or brush this off as a political distraction. This is not a partisan issue. It’s a potentially lethal problem — and it’s growing.

“In light of the bomb scares, online harassment, physical vandalism, death threats and other hate crimes, there is a simple question at hand that Americans of all faiths deserve an answer to – what is the Trump Administration going to do about the recent surge of anti-Semitism? What concrete steps will the White House take to address intolerance? We are going to keep asking these questions – and urge others in the press and public to do so as well – until we get a clear answer from our President.”