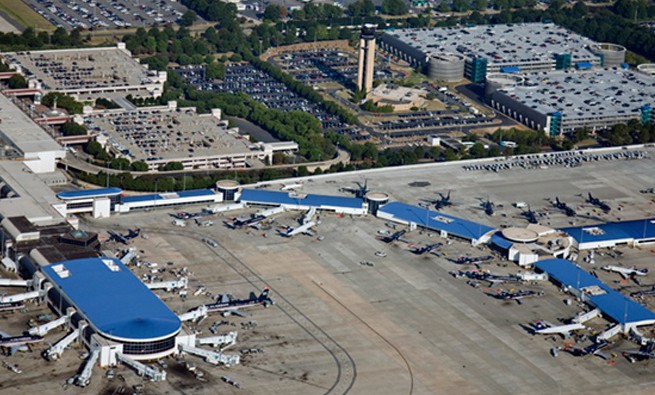 The Federal Aviation Administration has touted the benefits of its shift to a modern, more sophisticated system for managing air traffic.

NextGen, the FAA says, reduces carbon emissions, speeds departures and will save millions, even billions, of dollars in fuel costs. In Washington alone, where new flight patterns were put in place last year, the agency estimates that airlines will cut their annual fuel consumption by 2.5 million gallons.

But from the heart of Silicon Valley, which is home to some of the great minds that created the technology that powers NextGen, to Washington, home to many of those responsible for the rollout of the system, the switch has aggravated an old problem: airport noise.

Since the FAA began rolling out NextGen, noise complaints have jumped dramatically in communities as diverse as Phoenix; Palo Alto, California; and the District of Columbia.

At San Francisco International Airport, where new flight patterns were put in place in March 2014, noise complaints skyrocketed more than tenfold from 14,726 in 2014 to 152,336 last year.

In the District, there were 1,286 noise complaints in 2014; by 2015, the year NextGen changes were implemented, complaints jumped to 8,670 (although airport officials are quick to note that 6,500 of the complaints last year came from the same person). Even so, residents say complaints have risen dramatically.

“D.C. has become a poster child for what is happening all over the country,” said D.C. Del. Eleanor Holmes-Norton (D), who has been critical of the FAA’s process for notifying communities about the impact of flight-path changes.

NextGen is a $29 billion initiative designed to modernize the nation’s air traffic control system. Explained in the simplest terms, NextGen will replace the country’s World War II-era radar setup with satellite navigation, allowing planes to fly more direct routes, saving fuel, improving safety, and speeding takeoffs and landings, agency officials say. In Atlanta, where the system is in use, FAA officials say the effort has helped speed departures by 48 percent at the nation’s busiest airport.

But one consequence of the shift in air traffic is more noise for some people on the ground. In other cases, people in areas that never had airplanes flying overhead now feel as if they live on a runway. Take the Northern California community of Santa Cruz, where residents now contend with airplane noise even though the airport is 60 miles away.

Airport noise is a perennial issue, but anti-noise groups have powerful allies, including Sen. John McCain, R-Arizona. In the House, California Reps. Anna G. Eshoo (D), Jackie Speier (D) and Sam Farr (D), as well as D.C.’s Norton, also have been vocal participants in the Quiet Skies Coalition, which includes members from the District, Illinois and New York.

Frustrated residents also have turned to the courts. Last June, the city of Phoenix filed a lawsuit in federal court seeking relief. In August, a coalition of community groups in the District filed its own action seeking a review of the new flight paths. Both cases are pending in the U.S. Court of Appeals for the District of Columbia.

After months of what some viewed as stonewalling, FAA officials – prodded in part by Congress – have taken a more proactive approach, conducting meetings with affected communities and pledging more-aggressive outreach in areas where NextGen implementation is in its beginning stages.

“We are very concerned about doing everything we can do to be as responsible as we can about noise,” FAA Administrator Michael P. Huerta said.

As required by law, agency officials conducted environmental and noise studies in each of the communities where the new routes were put in place. In the District, FAA officials said the studies determined that there would be little or no impact on the community.

Try telling that to Tomasita Villarroel. She and her family live in the Palisades, just a few blocks from Hardy Recreation Center in the adjacent Foxhall neighborhood in Northwest Washington. In 1999, when house hunting, the family picked Foxhall because it was convenient to everything. But over the past year, that convenience has been overshadowed by the noise from a steady passage of airplanes overhead.

“It wasn’t like this before,” she said. “The planes were flying over the [Potomac] river, so we could hear them, but it wasn’t as loud.”

Just a few weeks ago, her son Luke’s teacher sent a note home saying the preschooler was falling asleep at lunchtime. Villarroel is convinced it is because of the noise.

“He wakes up regularly [at night] and can’t go back to sleep,” she said. She has tried a variety of strategies. She does not let him nap during the day, hoping he’ll be so tired that he’ll sleep through the noise, but so far it’s not working.

Norton said she thinks the FAA used outdated measures in its noise studies. Huerta said the agency is reexamining how it measures noise, noting that current standards date from the 1970s.

These days, “there may be a higher level of sensitivity to things that many years ago would not have constituted significant noise,” Huerta said. “So we will look at if the way we measure noise is still an appropriate measure and, secondly, what are the appropriate standards.”

In the case of Reagan National Airport, FAA officials said the new inbound routes were designed to follow the Potomac River, but one piece of land that lies under the flight path includes neighborhoods such as the Palisades, Foxhall and Georgetown.

The agency is part of a working group that includes residents, airport officials and the airlines and is trying to find a workable compromise. But some have doubts about whether officials are paying anything but lip service to their concerns.

“I’m always hopeful. You always have hope, but we also have a legal track as well,” said Ed Solomon, president of D.C. Fair Skies Coalition.

“When they come to us with the argument that ‘you knew what you were doing, you knew there was an airport there,’ well, yes,” he said.

But with new flight paths in and out of the airport, “things have changed. The noise started coming to us. Those flights have come closer to the District of Columbia,” Solomon said.

On a recent day, children dashed around the playground at the Hardy Recreation Center, launching themselves off the cheerfully green dinosaur and squealing with delight as their swings climbed higher. Above them, plane after plane roared across the sky – more than a dozen within a 20-minute period.

Nora Carbine and her husband, Howard Fenton, who bought their Palisades-area home in 1984, said they’ve grown accustomed to asking people to repeat things during phone conversations and warning out-of-town guests about what they call “the 6 a.m. wake-up call.”

And they rarely entertain outdoors.

Not long ago, Carbine was on a conference call with more than a dozen colleagues around the world discussing proposals for breast cancer research products. It was a pleasant October day and she had decided to open a window to let in some fresh air.

“I’m talking and these planes are going over,” she recalled. “And the leader of the call interrupts me and says, ‘Hold on. Stop for a minute, whoever is at the airport – put your phone on mute.’ And I had to say, ‘It’s me, I’m at my house and I can’t put the phone on mute because I’m talking.’ I was amazed he thought I was at the airport – it was funny and it wasn’t,” Carbine said.

Norton thinks progress is being made, although it might not be coming quickly enough for those who want relief now. She is confident, though, that a solution can be found.

“The same technology that was so smart to get you NextGen is smart enough to get you a quieter NextGen,” she said. “This is not the hardest problem in NextGen. . . . It is simply the problem that NextGen didn’t pay attention to.”