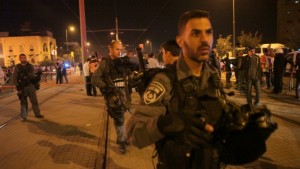 The Israeli Police announced Sunday it would limit access to Yerushalayim’s Old City and the Har Habayis compound over the next two days, following two terror attacks which left two Israeli men dead and injured three other people.

The police on Sunday said only Israeli citizens, local residents, students, employees who work in the area and tourists will be allowed entry into the Old City through Tuesday.

On the Har Habayis compound, “Muslim prayer will be limited to males aged 50 and above while there will be no age limitation on female Muslim worshipers,” police said in a statement.

The Muslim worshipers will only be allowed in through the Old City’s Lions Gate.

Israeli police and troops have beefed up their presence in Yerushalayim and the West Bank, amid fears of continued Palestinian violence, as low-level fighting and attacks roiled the capital and West Bank last night and Sunday morning, Times of Israel reported.

Five people were hurt overnight in rock attacks in Yerushalayim and the West Bank, according to Israel Radio.