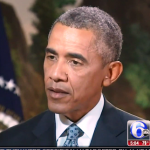 “It breaks my heart every time you read or hear about these kids of incidents,” Obama said in an interview with Philadelphia TV station WPVI.

“What we know is that the number of people who die from gun-related incidents around this country dwarfs any deaths that happen through terrorism,” the president added.

The shooting outside of Roanoke, Va., was the latest in a string of high-profile shootings that have cast a pall over Obama’s presidency.

Local television news reporter Alison Parker, 24, and cameraman Adam Ward, 27, were gunned down on Wednesday morning while on assignment by a suspect identified as Vester Lee Flanagan, a former employee of the television station.

Flanagan approached the pair as they were filming an interview and fired multiple shots in their direction. The harrowing incident was captured on live television.

The suspect posted video of the shooting on his social media account before reportedly shooting himself while being pursued by police.

“This is another example of gun violence that is becoming all too common in communities large and small all across the United States,” press secretary Josh Earnest told reporters.

Obama has described the day 26 people including 20 children were killed by a gunman at an elementary school was the worst of his presidency. Earlier this year, nine people were killed at a historic African-American church in Charleston, S.C.