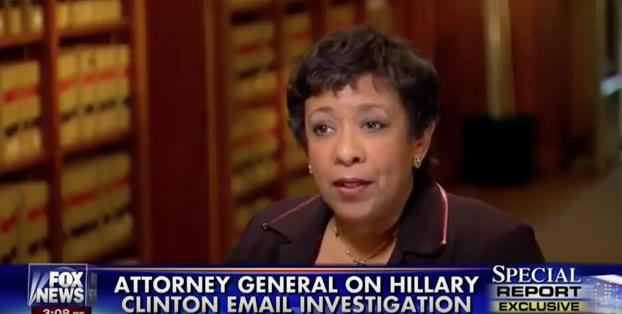 U.S. Attorney General Loretta Lynch repeatedly declined to answer any questions today about her department’s investigation into Hillary Clinton’s use of a personal email server while she was secretary of state, making for a bizarre congressional hearing in which she referred questions about the matter to a man lower than her on the organizational chart.

At the outset of her testimony Tuesday before the House Judiciary Committee, Lynch said it would be “inappropriate for me to comment further on the underlying facts of the investigation or the legal basis for the team’s recommendation.” That put her in contrast with FBI Director James Comey, who answered questions for nearly five hours last week about how he concluded Clinton should not face criminal charges.

When Republican legislators pressed for details, Lynch directed their inquiries to Comey, who sits lower on the Department of Justice’s organizational chart.

“He’s chosen to provide detailed statements, and I would refer you to those statements,” Lynch said. “I as Attorney General am not able to provide any further comment on the facts or the substance of the investigation.”

Lynch’s persistence drew critical rebukes from Republicans. Chairman Bob Goodlatte, R-Va., said not offering more information was an “abdication of your responsibility.” U.S. Rep. Jim Jordan, R-Ohio, said her actions on the Clinton email investigation broadly “contribute to this belief that the system is rigged.”

For their part, Democrats bemoaned that the conversation was focused on the former secretary of state’s email practices, rather than issues such as gun control and policing practices.

Lynch had announced last week that she was accepting the recommendation of the FBI director and federal prosecutors and closing the probe involving the presumptive Democratic presidential nominee, but the controversy is far from resolved. The hearing Tuesday marked the first time she has been questioned publicly about the decision.

Republicans have been waging an aggressive campaign to keep Clinton’s email practices in the news, and the issue presents a challenge to her presidential aspirations. A recent Washington Post-ABC News poll found that a majority of Americans – 56 percent – disapproved of the FBI director’s recommendation not to charge Clinton, and 57 percent said the issue made them at least somewhat worried about how she might handle her responsibilities as president.

When Comey publicly defended his recommendation that Clinton not face charges for mishandling classified information, he delivered a stinging public critique of her email practices and revealed facts that call into question her explanations of the matter.

He has said classified material traversed Clinton’s private server, and at least three documents bore subtle classification markings. He has conceded that there was “evidence of mishandling” classified information in Clinton’s setup and that an FBI employee who did the same thing “would face consequences for this.” He also has said that he thought Clinton was “extremely careless” and “negligent.”

A Clinton campaign spokesman has said of Comey’s testimony: “While Republicans may try to keep this issue alive, this hearing proved those efforts will only backfire.”

Unlike Comey, Lynch offered no new details on the investigation or explanations for the conclusion investigators drew, simply repeating the same talking points as Republicans launched different lines of attack. When Jordan asked her simply, “Who made the decision?” not to charge Clinton, Lynch offered only that she accepted the recommendation of a team of career prosecutors and agents, a point she had made previously. She said the team was led by the Justice Department’s National Security Division, but would not specifically say whether no political appointees were involved.

At one point, U.S. Rep. Trent Franks said Lynch was so skilled at dodging questions that he was “going to simply capitulate” and not ask anymore.

“Director Comey was speaking from his position as somebody who was more directly involved in the investigation,” she said.

The hearing with Lynch, which began at 10 a.m., was scheduled before Comey made his recommendation not to charge Clinton. Goodlatte said in a statement that other issues would be discussed, including the mass shootings in Orlando and San Bernardino, Calif., as well as the effect of technological advancements on law enforcement.

But Goodlatte said the decision not to charge Clinton would be addressed because it raised “serious concerns,” adding that it was “uniquely troubling” that Lynch met with former president Bill Clinton aboard her plane in Arizona before the decision had been made to close the case.

“No one is above the law, and the American people need to know that federal law enforcement is taking this misconduct seriously,” Goodlatte said.

Lynch had already addressed the meeting with Bill Clinton, saying that it happened spontaneously because the two happened to be at the same airport in Phoenix at the same time. She has asserted that no cases were discussed. Lynch has acknowledged, though, that questions about the encounter are “reasonable,” and given a second chance, she would not do it again.

Soon after the airplane meeting was publicly reported, Lynch announced that she would accept the recommendation of the career prosecutors and FBI agents looking into Clinton’s email use in a bid to quell concerns that politics were influencing the investigation. When Comey announced he was recommending no charges be filed, he said he was doing so without having told the attorney general beforehand.

Lynch repeated many of those same points Tuesday. She said she also had not discussed with Hillary Clinton the possibility of staying on as attorney general were the former secretary of state to be elected president.