Bayswater, NY – Long Island was among the main victims of Hurricane Sandy and one community bais knesses was particularly hard-hit.

Agudas Yisroel of Bayswater, located on Bayswater Avenue, and led by its rov, Rav Menachem Feifer, was completely flooded by the storm.

The Agudah of Bayswater, which is home to Yeshiva Zichron Aryeh, is located about a half-mile from the bay, where homes were destroyed by the storm. The shul itself is located slightly below street level and was under some seven feet of water.

A local community member related that the Sifrei Torah were removed prior to the storm. A Sefer Torah kept in a different local building wasn’t removed until the middle of the storm and sustained serious damage.

“The building of the Agudah is still standing,” a local resident said, “but everything inside – everything – has been destroyed. The shul will require a total renovation after just completing work made necessary after Hurricane Irene. From an aron kodesh, to a bimah, to seforim….there is just nothing that can be salvaged. ” 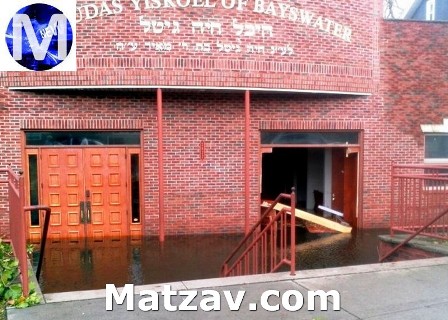 Those who can assist in the relief effort may send donations to Agudas Yisroel of Bayswater, 1360 Norton Drive, Far Rockaway, NY, 11691.

Elsewhere in the Far Rockaway and Five Towns area, tap water in the Woodmere area was thought to have had contamination issues last night. As of 10:45 this morning, Village of Lawrence representatives said that the water in the Five Towns is not contaminated and is potable.

RCSP was out in the Far Rockaway/Bayswater last night, and along with the police department will remain on the streets for the duration of this crisis.

Almost all homes are still without power, and while LIPA trucks are out on the street, it may be anywhere from 3 to 7 days until power is restored.

In Bayswater, Jerry Bloom Caterers and the Jewish Community Center of the Rockaway Peninsula began distributing food at 11 a.m. at the Young Israel on Healy Avenue.

The Achiezer hotline has fielded over 900 calls since Sunday morning, and the hotline remains up and running at 516.791.4444.