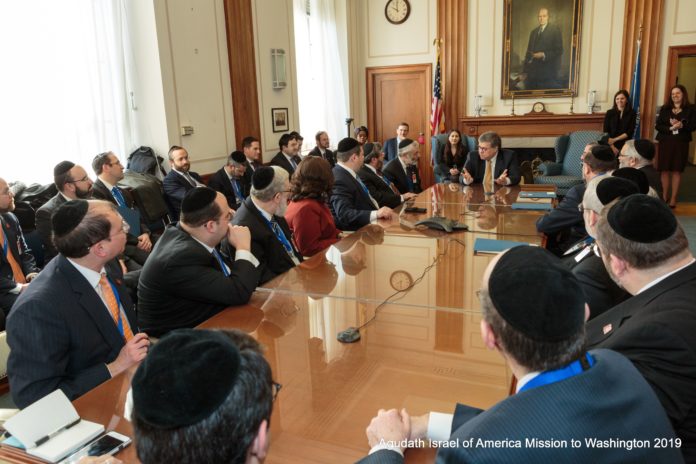 >>Follow Matzav On Whatsapp!<<
Yesterday the United States Department of Justice authorized the filing of a lawsuit against the Village of Airmont for actions that “unreasonably limits the practice of religion by the village’s Orthodox Jewish Community.”
In a letter to the Village, Acting US Attorney for the Southern District of New York Audrey Strauss writes, “we have determined that Airmont’s zoning practices…impose a ‘substantial burden’ on the Orthodox Jewish community’s religious exercise…discriminate against the Orthodox Jewish community ‘on the basis of religion or religious denomination’…and ‘unreasonably limits religious assemblies, institutions, or structures’.”
The letter further explains that, while the U.S. Attorney’s Office has been authorized to file suit against Airmont for violations of the Religious Land Use and Institutionalized Persons Act of 2000 (RLUIPA), it will briefly delay filing the complaint if the Village is “willing to negotiate a resolution of the matter” through a consent decree. Ms. Strauss points out that legal action will be taken by mid-September, and perhaps sooner, if a “response outlining in substantive terms that the Village is willing to negotiate a resolution” is not received within two weeks of receipt of her letter.
Agudath Israel has long protested the use of zoning laws to discriminate against Orthodox Jews and its Washington Office played an active role in crafting and promoting passage of RLUIPA. The group raised the issue with Attorney General William Barr during its 2019 National Leadership Mission to Washington. At that time, the Attorney General assured the group that his Justice Department would do everything it could to ensure American citizens are not ‘zoned out’ of neighborhoods because of their faith.
Participants recalled that at the organization’s annual dinner in 1992, William Barr, who was then serving his first stint as Attorney General during the George H.W. Bush administration, was honored with the Humanitarian Award. The reason for the honor, as then-Agudah President Rabbi Moshe Sherer noted in his remarks, was Attorney General Barr’s decision to file a civil suit against Airmont for creating zoning laws with the intent to hamper the growth of the Orthodox Jewish community in the Village.
It is now almost 30 years later, and the Village is again attempting to keep Orthodox Jews out. Now, as then, Agudath Israel is grateful that the Justice Department is prepared to take all steps necessary to fight religious discrimination and ensure religious liberty.