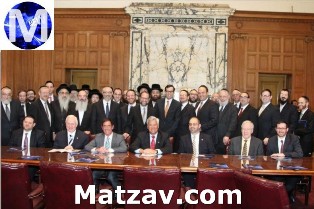 Tomorrow, April 19, is Primary Day across New York State. Voters will be selecting the candidates within each political party who will be running for President of the United States in the General Election. Voters in selected districts will also have a chance to participate in a special election for vacant seats in the New York State Assembly and Senate. Agudath Israel urges all of its constituents and friends to vote.

Voter turnout in primaries is generally low. That makes each vote count even more than it ordinarily does. That is especially true in this year’s presidential primary, when none of the candidates has yet clinched his or her party’s nomination.

Moreover, no matter who is ultimately elected, government officials look at which groups vote, and take their positions on the major issues of the day accordingly. Communities that vote are communities that are listened to and heard.

In the words of Rabbi Chaim Dovid Zwiebel, Executive Vice President of Agudath Israel, “please, take the time to vote. Do it for yourself . . . for your children . . . for your community . . . for Klal Yisroel.”

Disclaimer: Agudath Israel does not endorse or support any candidate in any election race.