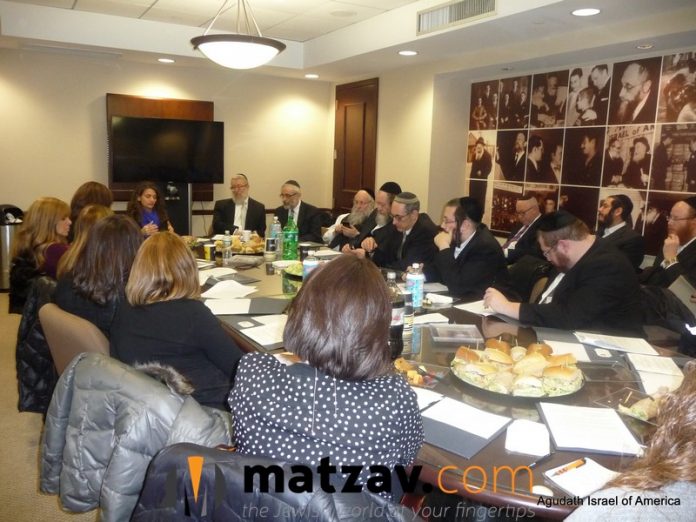 >>Follow Matzav On Whatsapp!<<
By Debbie Maimon
The Reider boardroom at the headquarters of Agudath Israel of America was the scene of an important meeting this past Tuesday that heightened cooperation between Mayor de Blasio’s office and parents seeking special education tuition reimbursement. More than 25 yeshiva administrators of special education schools from all over New York City gathered to dialogue with Karin Goldmark, the Senior Education Policy Advisor to the First Deputy Mayor of the City of New York.  They were there to discuss a new initiative proposed by the de Blasio administration.  The proposal would ease the burden of special education parents by creating a three-year plan to further streamline the tuition reimbursement process.
This would simplify a cumbersome, often litigious process for both parents and schools.
Mrs. Leah Steinberg, Director of Project LEARN of Agudath Israel, welcomed the participants and introduced Ms. Goldmark, noting the tremendous cooperation and assistance she has provided.  Ms. Goldmark began by speaking about the strides the city has made in providing appropriate education reimbursement in a timely fashion for the special needs students.  She also drew attention to an overall increase in special education reimbursement from the city.
Ms. Goldmark ascribed these important changes to a shift in mindset from the adversarial stance of prior administrations to a more supportive and caring culture in the current one.  Gone are the days of city litigators who viewed parents advocating for their special needs children as “legal adversaries” to be thwarted, she noted.  With “negotiation replacing confrontation,” the litigious process has been greatly eased.
Project LEARN, which advocates for the educational needs of children with special needs in nonpublic schools, attempted for years to work within the system to win appropriate placement and tuition reimbursement for special needs students.  But as obstruction from city officials continued to hamper efforts to win financial settlements from the Department of Education, Agudath Israel began to seek legislative relief.
Proposals for legislation that would simplify the tuition reimbursement process, as applied to special education placement in private schools, were sent to Albany. Twice the bill failed to win passage.  Finally, in the spring of 2014, an initiative by Mayor de Blasio’s office led to a game-changer.  An agreement with the city that incorporated Agudath Israel’s proposals was carefully hammered out.  This was a major breakthrough for special needs children and their families, recalled Mrs. Steinberg who actively worked with the city at every step along the way.
Since then, the Mayor’s Senior Education Policy Advisor, Ms. Goldmark, has been meeting on a regular basis with Mrs. Steinberg and periodically with delegates from special education schools to gain insight on how the new policies are being implemented.  At the most recent meeting with school representatives, she presented a detailed explanation of the city’s new proposal to facilitate special needs settlements, inviting discussion and suggestions afterward.  During a lengthy session of give and take with participants, she expressed appreciation for the feedback, saying it would help the department formulate the implementation of the new proposal.
One of the outcomes of the meeting, noted Mrs. Steinberg, was the recommendation for greater transparency in the status of each step of the process governing placement settlements, so that delays can be eliminated, or at least shortened.  When a settlement proposal is held up, parents should be informed as to what is causing the delay, and if they can do anything for their end to expedite the process.
In thanking Ms. Goldmark, Rabbi Chaim Dovid Zwiebel, Executive Vice President of Agudath Israel of America, expressed the gratitude of the community for the new tuition settlement policies and in particular, the culture of sensitivity to special needs children and their families.  “We’re very grateful to Mayor de Blasio, to you, Ms. Goldmark, and to the Department of Education for the concern, good will and determination to make things better,” Rabbi Zwiebel remarked.  “Your efforts have made such a difference for so many.  We look forward to working together for the benefit of all students.”
Rabbi Labish Becker, Executive Director of Agudath Israel, who attended the meeting, said, “It was impressive to hear the insightful questions and suggestions from the yeshiva representatives.  Their familiarity with the complex legal process under discussion with all its various challenges reflected their great involvement and determination.”
Ms. Goldmark commented that she enjoyed meeting with individuals dealing with this process on a daily basis.  She thanked participants for their valuable feedback about the impact of the department’s policies, adding that she looks forward to continued collaboration with the community.