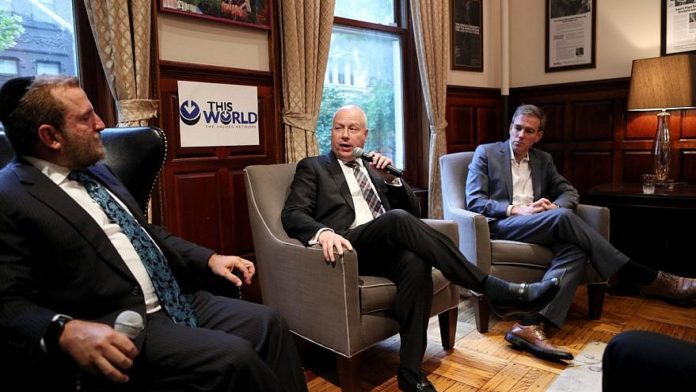 It has been a busy week for Middle Eastern affairs. Israel announced the establishment of “Trump Heights” in the Golan, Iran has announced it will soon achieve higher uranium enrichment levels, and the United States has announced that Israel will not be attending next week’s economic workshop in Bahrain. That workshop has drawn significant attention as it is the Trump administration’s much anticipated first foray into the conundrum that is the Arab-Israeli conflict.

As a pretext to the workshop, the World Values Network, led by Rabbi Shmuley Boteach, hosted an informal sit-down with Jason Greenblatt, chief Middle East negotiator to the White House, and New York Times’ columnist Bret Stephens to explore whether peace between Israel and the Palestinians is truly possible.

Buried in the 90-minute-long discussion, but among the most important comments he made, Greenblatt emphasized that “blaming the settlements for the conflict and this constant focus on settlements is a farce. The lack of peace has nothing to do with the existence of settlements.”

Stephens added to that, saying “what needs to change is that the issue is not about boundaries. If it was, we would have settled it long ago.”

Contrary to, or beyond what the Trump administration has thus far been emphasizing, Stephens said that the conflict is also “not about economics.”

“We’ve ripped off the Band-Aid; we are cleaning out the wound. Will we be able to stitch it back together?”

“The issue here goes to fundamental choices about what a Palestinian state is supposed to be for: essentially the destruction of the Jewish state,” he said. “We need to talk directly to the Palestinians themselves. That is the difference America can make.”

Greenblatt clarified that the Trump administration does not intend to forcefully impose a plan. He explained that the reason the White House is starting with economics first is that “this is a very detailed peace vision. You cannot have a successful peace agreement without a successful economic plan. We are worried about the days, weeks, months and years after.”

As to why the peace plan is being split into two stages—the first economic, the second diplomatic—he said “we couldn’t do it all at once. It would be a great deal of information for people to digest. We felt the best thing was start with the economics. Let the Palestinians [understand the benefits]. And there are some benefits for Jordan and Egypt as well.”

With Israel’s political situation on hold as another election looms on Sept. 17, the chosen candidate will have until Nov. 6 to form a coalition government. This delay has caused concern that the peace plan will be thrown into disarray. “In a perfect world, we would release the political vision shortly after the economic vision,” said Greenblatt. “We will have to make a decision after the Bahrain workshop as to when we will release the [diplomatic] plan.”

With the launch of President Trump’s 2020 campaign this week, there are also concerns as to what extent the president can focus on the Arab-Israeli issue. However, Greenblatt said reassuringly that “this president has the unique ability to handle many complex tasks at the same time.”

“So, you see the president fully engaged in the peace process in the midst of a turbulent presidential election?” asked Boteach.

“If we are lucky enough to get off the ground,” replied Greenblatt.

‘Prove to us you are worthy of having a state’

Returning to whether peace is even possible to begin with, Stephens pointed to three issues. The first, he said, is that “the fundamental problem that Israel faces is you have a Palestinian leadership today that is unwilling or unable to come to terms with the idea of peace with its Jewish neighbor in almost any conceivable scenario.”

“There is merit in having a plan that begins with an economic vision and proceeds to a political one,” he added, “but the predicate still isn’t there, neither in the willingness of Hamas or Fatah to participate in either of them.”

Second, Stephens insisted that the only way to move forward is for the United States and other world leaders to “start telling the truth to the Palestinian people.” They must be told, “ ‘You will never destroy Israel. If you want a state, prove to us that you are worthy of having a state, and that you are not a liability.’ ”

Stephens said the Palestinian must also demonstrate “in some meaningful way” that they are capable of governing themselves. “So far, you are not,” he said of the Palestinians.

The third issue, according to Stephens, is that there are “quasi-legitimate political groups that are sworn to their neighbor’s destruction and committed to terrorism as a form of political end-seeking.”

He said these three issues must be addressed “before the question of what you might offer the Palestinian. If the Palestinian leadership were interested in economic betterment, they would have gone for it long ago.”

‘Why should we put you at the top of the list?’

Stephens also emphasized that Western leaders should recognize that there are other peoples who yearn for statehood, such as the Tibetans, Tamils, Kurds and Catalans. He said the Palestinians should be asked point blank, “Why should we put you at the top of the list when it comes to a consideration of statehood? What is it that you are prepared to do to demonstrate that we will not be ushering into existence another South Sudan, another drain on the world’s resources, another threat to the neighborhood? This is where I think it has to begin. With truth-telling by leading members of the Western community.”

Boteach defended Greenblatt, saying he has made significant efforts to tell the truth. Boteach then asked him, “Why do you believe that an economic workshop is the way to begin?”

Greenblatt said “we could have changed the order of things. One of my biggest disappointments for me on this job is that we have been unable to get the Palestinian Authority from paying terrorists for killing Israelis. So we decided to break the audience apart into two. We can either preach to the P.A. and get nowhere, or we can speak to the people.”

“We should say to the Palestinians: ‘We wish you well. Here are our expectations, and we hope you meet them.’ ”

Greenblatt said that both he and Kushner have been speaking to the Palestinian people, and that “the feedback we are getting from ordinary Palestinians is very positive.”

Boteach asked whether the reason for the summit first is to circumvent the Palestinian leadership and try to reach those people.

Greenblatt said he would avoid the term “circumvent.”

Stephens said he didn’t want to say that Greenblatt’s efforts of succeeding were zero percent, though he thought they were low. “We should say to the Palestinians: ‘We wish you well. Here are our expectations, and we hope you meet them.’ ”

But how far will the Trump administration try to push the peace deal if there is no traction?

Greenblatt said, “We’ve ripped off the Band-Aid; we are cleaning out the wound. Will we be able to stitch it back together? … Trump is a huge supporter of Israel, and he also wants to try and help the Palestinian people. He is realistic. I don’t think he would continue beating his head against the wall. We just don’t know yet.”

He added, “We’re not naive. We understand the chances. … We’re not just looking for a photo-op. … History will judge us if we don’t try.”