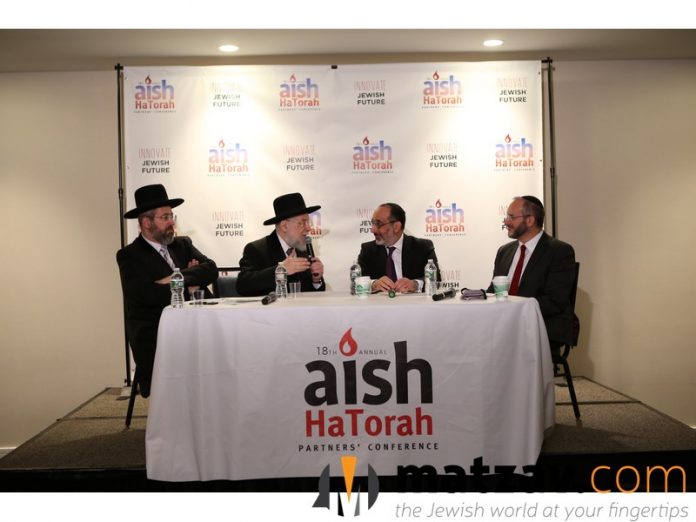 “We wanted to call it (the Aish branch of San Diego) the Hokey Pokey—the place where you turn yourself around.”
Thus quipped Rebbetzin Yaffa Palti, who, along with her husband Rabbi Nisso Palti, the dynamic Rabbi of Aish HaTorah of San Diego, accepted an award at the Motzoei Shabbos keynote session.
It’s the place where you turn yourself around.
This moniker doesn’t just apply to Aish San Diego, which, under the leadership of Rabbi Meir Rosenberg, has sprouted numerous branches in the past few years, but to Aish worldwide and its impact on our people.
As Rav Yisroel Meir Lau, youngest survivor of Buchenwald, former Chief Rabbi of Israel and Chief Rabbi of Tel Aviv, expressed in a passionate address, “In every generation, they rose to annihilate us, but the Blessed One saved us from their hands, enabling us to rebuild.”
The full magnitude of Aish HaTorah’s success in reaching tens of thousands of secular Jews around the globe was apparent throughout the weekend, as delegates from as far as India and Chile attested to the impact that Aish has made on their lives.
Sara from Sacramento, a proud Jewish mother who came to meet her newfound friends, grew up in what she described as a spiritual desert. Thanks to Aish, she is now making plans to move to Eretz Yisroel and reconnect to her roots. 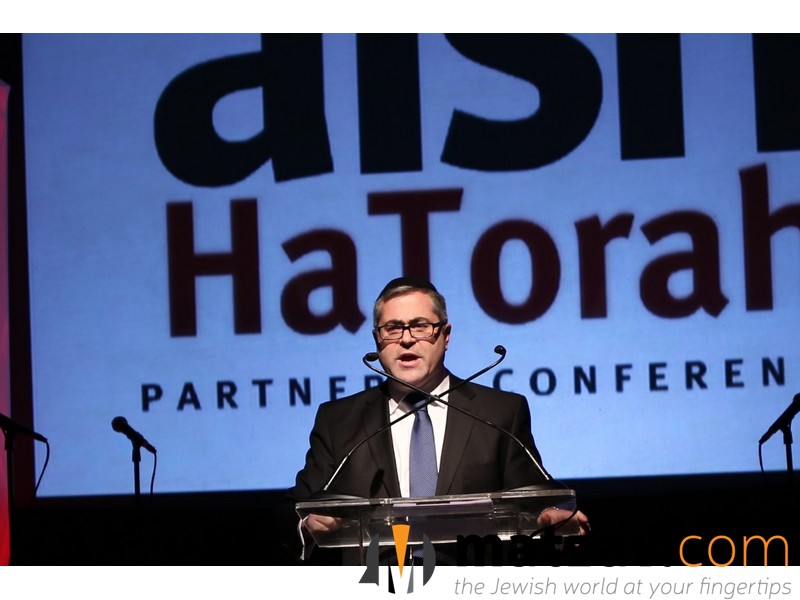 Ariana S., an optometrist from Brooklyn, arrived in Staten Island from the former Soviet Union, married, and raised her family with the same drive and determination that propelled her to learn English, graduate medical school, and open her own practice.
Today, thanks to the impact of Aish, Ariana’s three sons are in yeshiva, her eldest planning to attend a prominent mainstream yeshiva next year. Her husband, who discovered he is a kohein at the age of eighteen, (ironically, via a trip to the cemetery,) is equally passionate about their commitment to a life of Torah and mitzvos.
Josh Brody, who ‘took down the house’ on Friday night, is another role model, a young man who turned his life around due to Project Inspire—and now uses his talents and abilities to pass the baton further.
These are the unsung heroes and heroines of Aish, the men and women and children who have turned their lives around, and are now giving back by teaching and inspiring others. 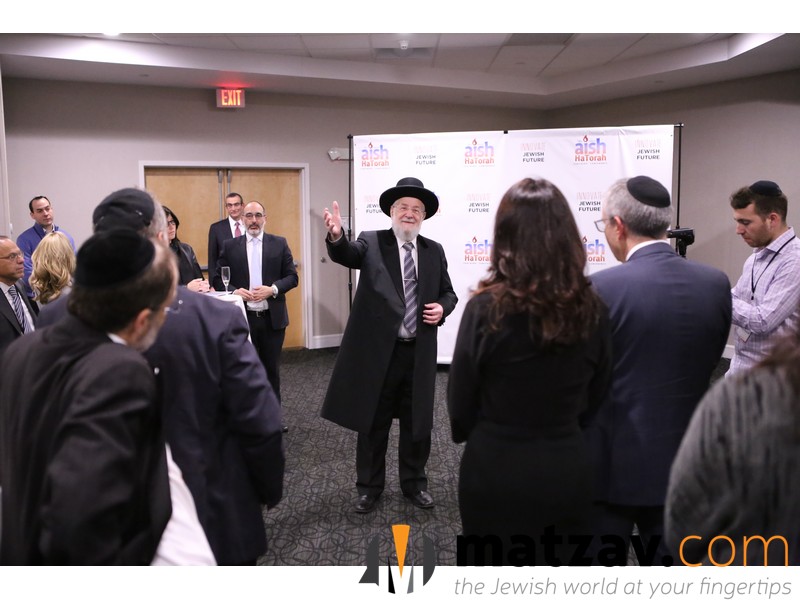 Perhaps one of the most telling sessions during the weekend packed to the gills with inspiration was the Motzoei Shabbos breakout session. Moderated by Rabbi Chaim Sampson, Founding Director of Project Inspire, a worldwide movement to encourage lay people to reach out to the unaffiliated Jews around them, it was an opportunity to hear from ‘people like us who are making a difference.’
The weekend began with a rousing pre-Shabbos concert by the famous Glaser brothers, Rabbi Yom Tov, a senior Aish lecturer, and Sam, who have inspired crowds around the world with their classic and enduring story of return.  Kabalos Shabbos was another musical highlight, led by the melodious nigunim of AKA Pella, whose symphonies kept us humming through the weekend. Before Ma’ariv, Rav David Lau, Chief Rabbi of Israel, was introduced by Rabbi Yaakov Meyer, the director of Aish HaTorah of Denver and a tireless organizer of the stellar program.
Simultaneously, Mrs. Rachel Burg, the director of Camp Dina, spoke passionately to a roomful of women about Mindful Mothering and how to raise our children as individuals.
Watching the give-and-take during the Friday night dinner was a true example of the diversity, and beauty of Klal Yisroel. The 1,000 plus participants were spread over four dining rooms, assigned to specific seats.  There was a roomful of Aish Hasbara members (activists in training), along with their leaders; many graduates of Ilana Cowland’s highly successful Jewel groups, which are three week ‘crash courses’ in Judaism while exploring Eretz Yisroel in an uplifting environment; renowned Rabbonim and lay leaders, and regular families who are not so regular after all. 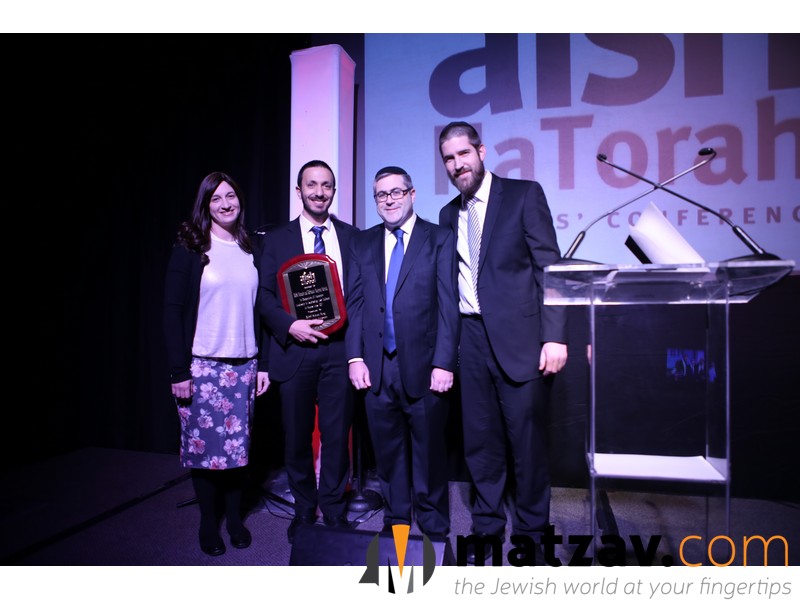 On one table, Tzipory, a woman from New Square, was catching up with her Torah phone partner, Rebecca, who traveled from South Carolina with her adorable two-year-old, and who had never seen such a large concentration of fellow Jews in her life!  Nearby, a group of young women who had taken classes at Aish was engaged in animated discussion about their plans to continue learning and growing.  A young couple who run programs in the eclectic Village Shul in Toronto was schmoozing with a Flatbush family who’d brought several of their Shabbos guests, and so on.
During a lull between courses, the men danced through the dining rooms, linking hands, their unity and sense of purpose palpable. The meal ended with a spirited Birchas Hamazon, led by AKA Pella, after which we headed to the Keynote Session.
Rabbi Yossie Friedman, COO of Aish HaTorah and Managing Director of Project Inspire, introduced Dr. Stuart Hytman, who, along with his wife Andrea, are the true heart and soul behind Aish. The one and only Rav Gav then shared powerful vignettes of his ‘brush with mortality’ this past Rosh Hashanah, and how the Aish family really is one family. Rav Lau underscored this message with a stirring address about what taking responsibility really means. 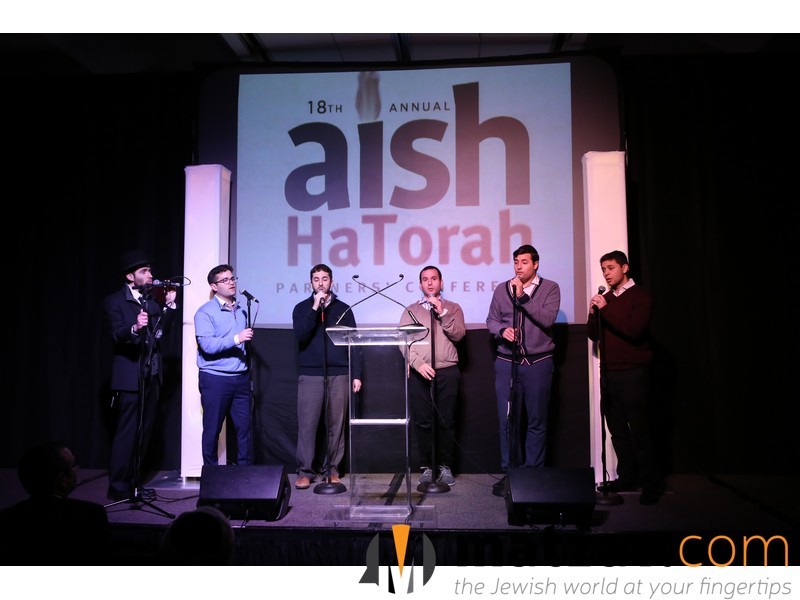 An intense night of breakout sessions and a delectable oneg kept us awake long past our bedtime, but “Rap with the Rabbis”, the stimulating question and answer session which ended way past midnight, was well worth the lost sleep. The panel of Aish Rabbis didn’t shy away from even the most provocative questions, tackling them with candor, humor, and honesty.
The following day was more of the same – inspiring tefillos, delicious food, and stimulating lectures. At the keynote session, introduced by Mr. Allen Isaac Gross, Convention Chairman, Rabbi Warren Goldstein, Chief Rabbi of South Africa and Founder of the Worldwide Shabbos Project, delivered a moving talk on making Shabbos relevant.
Throughout the afternoon and on Motzoei Shabbos, the “Leadership Track” and “Discovery Track” sessions ran simultaneously with the “Rav Noach’s teachings track,” giving us a tiny, but delectable, taste of what Aish Global has to offer.
One of my favorite sessions, “Making a Good Marriage Great,” was delivered by the Cowlands, Rabbi Jamie and Ilana, an Aish ‘Power Couple’ whose wise insights shed light on “T.M.T.—This Means That,” a brilliant insight on how we base our current reactions on past experiences, and how to set ourselves up for success.
Havdalah came all too soon, with another masterful experience by the Glaser brothers and a Baal Shem Tov story by Rabbi Tzvi Sytner of the Village Shul in Toronto. This was followed by impromptu dancing on both sides of the mechitzah, as we gave expression to our emotions of unity during this unforgettable weekend.
The Motzoei Shabbos breakout sessions included some of the famous Aish Discovery presentations, including the fascinating “Codes in the Torah” by Rabbi Moshe Zeldman, and the Purimfest slide, connecting the ten sons of Haman with the Eichmann trial. Wow!
The climax of the weekend was the Motzoei Shabbos keynote, where Rabbi Steven Burg, the tireless Director General of Aish HaTorah, presented an update of how Aish has blossomed all over the world. Rabbi Tzvi Sytner of the Village Shul depicted the explosive growth of Aish Toronto, who partnered with J-Inspire to introduce one-on-one learning for over 100 chavrusas each week, calling it “the wave of kiruv in the future.”
Rabbi Meir Rosenberg, the Director of Aish Latin America, with numerous branches in Central and South America, introduced Rabbi Arturo Kanner, the Director of Aish Mexico. Rabbi Kanner, a talented and brilliant innovator, showcased his personal growth app, bringing Spanish speaking (and eventually English speaking) people around the world to increased self-awareness.
The Sunday keynote session featured Justice Richard Bernstein, an Orthodox blind judge whose journey of courage and faith was profiled on Aish.com, setting an example of perseverance despite the odds. Because, after all, that is the journey of Klal Yisroel. We all have the ability and skills to make a difference, to reach out of our comfort zone and say hello to the neighbor down the street, your children’s bus driver, and our millions of brothers and sisters, hiding within plain sight.  Aish is here to light the spark and encourage us on our journey.
{Matzav.com}