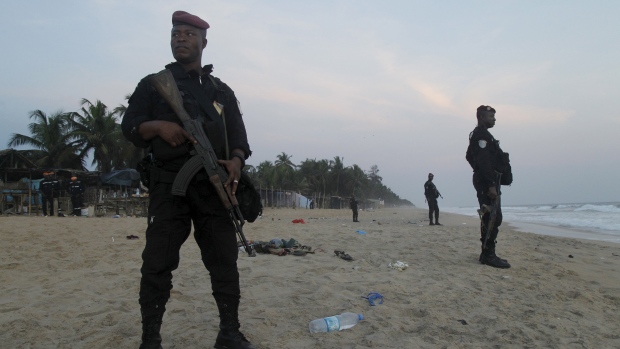 Militants linked to al-Qaida said they led an attack that killed at least 16 people in Ivory Coast, the third assault on a West African hotel since November.

Al-Qaida in the Maghreb and al-Mourabitoune claimed responsibility, Mauritanian newspaper al-Akhbar said, citing sources close to the Islamist fighters. The groups use the paper to publish claims of responsibility. At least 14 civilians and two soldiers were killed, Agence-France Presse reported, citing President Alassane Ouattara. At least six militants were killed, the government said in an e-mailed statement.

Ivory Coast, the world’s biggest producer of cocoa, has been on high alert since November when militants linked to al-Qaida led an attack at a Radisson hotel in Mali that left about 20 dead. The group pledged to continue attacking allies of France and led a similar assault that left about 30 dead in Burkina Faso in February.

The Islamist fighters have established bases in northern Mali since a coup in 2012. French President Francois Hollande sent thousands of soldiers to push back the fighters, who benefited from cash and weapons that flowed south after the ouster of Libya’s Moammar Gadhafi in 2011. The militants have vowed to attack French interests until the government pulls soldiers out of the region.

L’ Etoile du Sud hotel, the Wharf Hotel and Hotel La Taverne were the targets. Grand Bassam is about 30 kilometers (19 miles) east of Abidjan, the commercial capital of Ivory Coast. Grand Bassam, the former capital during French colonial rule, is popular with residents of Abidjan as a weekend getaway. The beach has more than a dozen restaurants and hotels that are frequented by both Ivorians and foreigners.

Ivory Coast’s economy has rebounded under Ouattara after almost a decade of conflict in the 2000s and a disputed election in 2010 that left thousands dead and forced the country to default on its foreign debt. Ouattara has pledged to boost economic growth to about 10 percent per year through 2020 from about 8 percent now.

At least five Lebanese citizens were injured and the rest were evacuated from the hotels, the state-run National News Agency reported. The U.S. State Department said there were no reports of Americans who were injured or killed. One French citizen was killed, the government said.