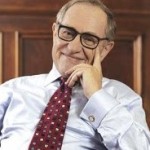 Long-time Democrat, Israel defender and famed law professor Alan Dershowitz told a shul audience on Motzoei Shabbos that he was “furious” with President Obama over the Iran nuclear deal.

Speaking at Manhattan’s Park East Synagogue on the Upper East Side to a crowd gathered for Selichos, Dershowitz implied he had been betrayed by the president he had formerly championed.

He recounted being invited to the Oval Office before Obama’s reelection in 2012, where the president had committed to being vigilant on the Iranian nuclear issue. Obama has now crossed many of his own red lines, said Dershowitz, who backed Obama in two elections.

The international law expert, who just published The Case Against the Iran Deal: How Can We Now Stop Iran from Getting Nukes? –– a book he completed in 11 days — went on to point out that not a single senator who announced support for the deal was of the opinion that it was a good agreement.

He also asserted that the P5+1 powers have entered into an as yet unseen secret side deal with Iran, which negates the Joint Comprehensive Plan of Action’s central premise: that “Iran reaffirms that under no circumstances will Iran ever seek, develop or acquire any nuclear weapons.”

The former Harvard scholar said the deal was worse than Russian roulette, because there is a “more than a one-in-six chance under this deal that Iran will develop nuclear weapons.”

As someone who knows the Israeli prime minister, he insisted that Benjamin Netanyahu is “not going to preside over a second Shoah [Holocaust],” and if it came to the “terrible tragic choice” of allowing Iran to go nuclear or taking military action, the premier would chose the latter.

The current battle in Congress over the upcoming vote on the nuclear deal will by no means end the issue, Dershowitz added, saying, “The small battle has been lost; the big battle is just beginning.”

His remarks followed those of Park East’s senior rabbi, Arthur Schneier, who called for Jewish unity on the Iran issue in his annual “State of World Jewry” address, preceding Selichos. The prestigious gathering, led by Chazzan Yitzchak Meir Helfgot, has been described as “a major occasion for the city’s most prominent socialites, a must-attend event for the wealthy and powerful.”