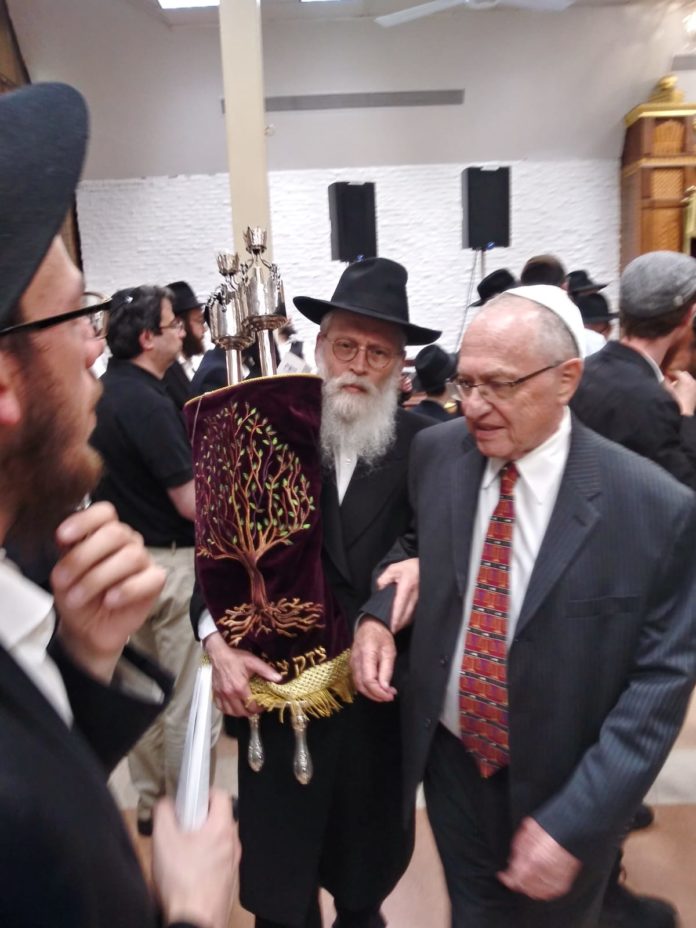 >>Follow Matzav On Whatsapp!<<
Alan Dershowitz
I am a pragmatic rationalist. I calculate the costs and benefits of most of my actions, especially when I am representing a client. For the 50 years I was a professor at Harvard Law School, my goal was never to teach the students what to think, but to teach them how to think. I employed the Socratic method in my classes, demanding rational responses from my students. I have never thought of myself as a spiritual person, because for me spiritual was the antithesis of rational.
But recently a Torah – a parchment scroll containing the five books of Moses – was dedicated to me for my pro bono work in defending indigent and other prisoners. The ceremony was held at Chabad headquarters in Brooklyn, with hundreds of people dancing in the streets to honor a new Torah. I accepted the honor because I wanted to help the group – Aleph – that I worked with on many of these cases to raise needed funds to continue its work. I fully expected to enjoy the dedication, because members of my family, old friends and colleagues would be there. I did not expect to feel a spiritual connection with the Torah that was being dedicated.
A TORAH is completely handwritten by a trained scribe – a profession going back to the beginnings of Jewish history. Every letter must be perfect. It takes months to write the hundreds of thousands of letters that compose the Torah. If one letter is wrong or smudged, the entire Torah is invalid.
When a Torah is near completion, the tradition is for the scribe to allow the person to whom it is dedicated to fill in the last few letters (what pressure!). The last word in the Torah is “Yisrael” – the Hebrew for Israel. As the scribe and I filled in these final letters, with the scribe guiding my hand, I felt a deep connection to my heritage. Part of it was rational – after all, I did grow up in Brooklyn as a Modern Orthodox Jew, and this event took place just a few blocks from the high school I had attended. Nostalgia is a natural, indeed rational feeling. But there was something else. Something deeper. Something unexpected.
My hyper-rationalism requires me to be skeptical about everything, including the divine origins of sacred texts, but for a few moments my rationality was suspended in favor of spirituality.
I looked at the familiar words of the Torah, words I had chanted many times during my adolescence, both in preparation for my bar mitzvah and for the dozen of years thereafter that I remained strictly observant, regularly reading from the Torah. Even in recent years I have been called to read from the Torah during my periodic visits to my local synagogue. While getting an aliyah – a blessing over the reading of the Torah – I once again viewed the beautiful calligraphy of the Torah’s words. I admired the beauty and the craftsmanship that had obviously gone into creating these letters. But I didn’t feel the deep connection to them that I felt during the dedication of my Torah.
I held the quill in my hand. The scribe dipped it in special organic ink. Then together we filled in the last letters, each of which I dedicated to the memory of departed family members or the refuah shleima (full recovery) of sick friends. I felt a sense of overwhelming connection, not only to my past, which goes back only 80 years, but to the thousands of years since the first Torahs were written by the first scribes. One does not have to be particularly religious or naturally spiritual to feel this connection.
Participating in the writing of an ancient Torah – on parchment, which will endure physically beyond my life, the lives of my children and grandchildren, even the lives of my great grandchildren – gave me a strong connection to the arc of Jewish history. I imagined all the Dershowitz’s and Ringels (my mother’s family) who had read from Torah scrolls over the centuries. I had a harder time imagining future generations of Dershowitz’s being as connected to the Torah as past generations had been. Rationally, I understand that things change. Spiritually, I felt sadness about change. At that moment, spirituality trumped rationality.
When I looked around me and saw hundreds of young children in baby carriages and strollers walking with their parents, joining in the festivities and kissing the Torah as it passed by, I realized then – both rationally and spiritually – that the tradition would endure, though my descendants might not be part of it, at least not in the same way that these hassidic children would be part of it.
Soon the dedication was over and I traveled from Brooklyn to Manhattan. The trip took me from a visit to a world of spirituality, in which I was temporarily immersed, back into my world of rationality, where I will spend the remainder of my life. But I will never forget that spiritual moment.