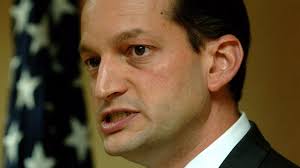 The Senate on Thursday confirmed Alex Acosta as secretary of Labor, filling out President Donald Trump’s cabinet as he approaches his 100th day in office.

The 60-38 vote confirms Acosta to the post. Once sworn in as the nation’s 27th secretary of Labor, the son of Cuban immigrants will lead a sprawling agency that enforces more than 180 federal laws covering about 10 million employers and 125 million workers.

Acosta has been a federal prosecutor, a civil rights chief at the Justice Department and a member of the National Labor Relations Board. He will arrive at the top post with relatively little clear record on some of the top issues facing the administration over key pocketbook issues, such as whether to expand the pool of American workers eligible for overtime pay.

Acosta wasn’t Trump’s first choice for the job. Former fast food CEO Andrew Puzder withdrew his name from consideration last month, on the eve of his confirmation vote, after becoming a political headache for the new administration. Read more at LA Times.